Laluni is an agriculture community located on the Soesdyke Highway, Region 4 and can be accessed via a nine-mile road from Kuru Kururu. The community, which has a population of approximately 300 persons, has seen significant improvement under the Coalition Government.

At a recent community engagement, several residents commended the administration for the support they have been receiving, especially in the health, education and agriculture sectors and youth development. 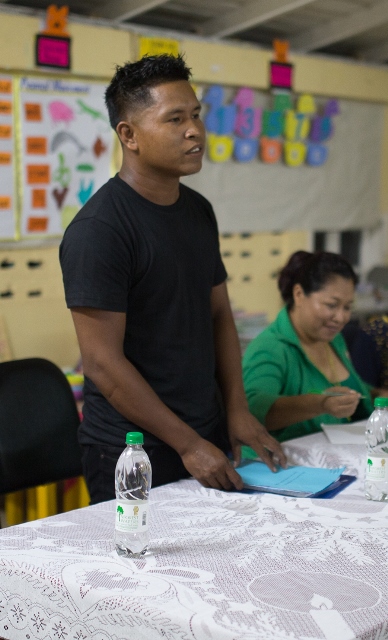 “Since the APNU+AFC took office, it is then that we started seeing development in our community. In previous years, a few things were done but, I’m saying that we have our government that has given support that is outstanding and we are very thankful,” Chairman of the Community Development Council (CDC), Aaron Defreitas said while listing several initiatives rolled out in the village over the last four years.

Defreitas explained that the Laluni Primary and Nursery School, as will as the health centre, are now powered by solar panels. This, he said, was made possible by the Ministry of Public Infrastructure. Residents of the community are also benefitting from a regular supply of potable water to their homes for the first time. According to Defreitas, the CDC is engaging the Guyana Water Incorporated (GWI) to expand the system to ensure that all of the residents’ benefit.

The village also received a tractor and trailer, which was welcomed by the farmers in the village. A bus was also procured as part of a $5M Community Development (CDP) project under the Amerindian Development Fund (ADF).

With support from the administration, the community was able to erect a monument, in honour of its founder Wilfred Henry, and have its history documented.

The community continues to benefit from Presidential Grants facilitated by the Ministry of Indigenous Peoples’ Affairs. These grants were used to upgrade and expand the community ground for recreational purposes. Twenty youths who received training through the Hinterland Employment and Youth Service (HEYS) programme, now have well-established businesses.

Defreitas also outlined the village’s three-year Village Improvement Plan as was mandated by His Excellency, President David Granger. The proposal, he noted, which will include development for all sectors, will be presented to the government soon. “We want to see street lights in our village, the school and hospital having access to clean potable water that is the vision the council is working to present to our government… We have seen very good development, our village office is fully furnished it has computers we just need internet service… I am very pleased and proud to say that our APNU+AFC government has done very well and I want to urge you the resident to support development. We want our three years of community development to continue, let us support this government so that our plan can become a reality.”