Chairman of the Caledonia/Good Success NDC

Members of the Media

In countries with Guyana’s terrain, where agriculture is done in a significant way on land below sea levels, and is very vulnerable to the effects of climate change, especially rising sea level, water management systems are critical. Our approaches to agricultural expansion and sustainability are, therefore, based on risk reduction emergency and disaster management,   revolving around adaptation and mitigation initiatives to prevent and manage floods and droughts. Therefore, in our pursuit of our Agriculture Agenda, it is essential that we utilize water as efficiently and effectively as far as possible. The MoA and the GoG are committed to this endeavor.

Guyana’s Region 4 comprises an area of 1,843 square kilometers (711 square miles) with its population living predominantly on coastal lands which are bound to the north by the Atlantic Ocean, to the west by the Demerara River and to the east by the Mahaica River and Region 5. This land is protected from flooding by a seawall along the Atlantic Ocean that prevents the sea from inundating the area, and an inland water reservoir that is dammed on three sides. The reservoir dam parallels the Mahaica River, the Atlantic Ocean and the Demerara River and prevents storm water from the inland area from entering the coastal land. The reservoir – referred to as the East Demerara Water Conservancy (EDWC) – is a large, shallow water storage system with a catchment area of 571 square kilometers (220 square miles). In addition to flood control, the EDWC provides agricultural lands (rice and sugar production especially) and urban areas with irrigation and drinking water.

In the decades leading up to the 2005 and 2006 floods, the operational capacities of the EDWC and coastal drainage systems declined due to insufficient physical investments and inadequate disaster preparation and management capacity. Following the floods, the Government of Guyana (GoG) reemphasized the importance of flood risk management to Guyana’s economic, social and political well-being, increasing the budget for the National Drainage and Irrigation Authority to undertake investments, maintenance and future planning.

During rainfall periods, flood protection is dependent upon both the integrity of the EDWC dam and effective drainage in the coastal areas. A series of drainage canals controlled by sluices reduce water levels by draining the EDWC and avoid dam failure caused by water levels exceeding safe operating levels or overtopping. A separate network of drainage and irrigation canals and pumps drains water from this area into the Demerara and Mahaica Rivers and the Atlantic Ocean to prevent, and reduce, the risk of flooding that would occur due to rainfall and runoff of storm water.

Significant improvements have been made to the EDWC dam since 2005. However, it remains vulnerable and frequently operates above the safe operating water level. The 2005 and 2006 floods left the EDWC dam in a weakened state, in need of maintenance and re-enforcement, and highlighted the fact that the EDWC did not have adequate drainage capacity to protect the dam during storm events. Since that time, the Government of Guyana has repaired sections of the dam damaged during the flood and some parts still have marginal stability. Additionally, significant investments – a combination of GoG, World Bank and Japanese International Cooperation Agency (JICA) funds – were undertaken to improve water flow within the conservancy, rehabilitate several drainage relief canals and sluices, purchase equipment for maintenance and repair and construct the new Northern Relief Channel. These investments have improved the stability of the dam and operation of the EDWC, but the dam remains vulnerable to catastrophic breaching. Currently, water levels in the EDWC are typically above safe operating levels during storm events and the dam is marginally stable due to periodic slips and small breaches.

Similarly, the coastal drainage system has been upgraded since 2005 but is inadequate, resulting in annual flooding in Region 4. The poor performance of the coastal drainage system in 2005 led to catastrophic flooding lasting from 1 to over 3 weeks in some areas, the loss of 34 lives, a disease outbreak, population displacement and infrastructural damage. Since 2005, GoG with assistance from the Inter-American Development Bank (IDB) and Japanese International Cooperation Agency (JICA), has been investing in the drainage systems in Region 4 including constructing, maintaining and rehabilitating drains, canals, pump stations and intake and outfall structures. However, the system currently has inadequate drainage, pumping, and channel capacity, and compromised efficiency since it is combined with agricultural drainage. Investments in infrastructure to improve drainage capacity and efficiency are needed to reduce the impacts of floods in this area.  These will be achieved through a US$11.89 Million Flood Risk Management Project which is presently being implemented.

A key element of the EDWC system that is currently not functioning is the Cunha Canal which is located on the western side of the EDWC discharging into the Demerara River. Located on the edge of the EDWC, the Cunha Canal is intended to serve two purposes. The first is to drain nearby farming areas (Kuru Kururu; Coverden; Pearl and Sarah Johanna).  The second use is to manage water levels in the EDWC, which during critical rainy periods needs drainage to keep water levels from exceeding the safe operating level. This reduces the risk of dam breaches caused by the increased stress or overtopping of the dam when water levels are high.

Around 1990, the canal was diverted from its original alignment, taking a turn at, and following the EBD public road and joining the Sarah Johanna channel that flows to the Demerara River. This diversion created a hydraulic barrier in the discharge of the Cunha canal due to the size of the Sarah Johanna channel and restrictions imposed by the bridge and culvert structures constructed to accommodate local access and flow under the Public Road. With this additional flow from the Cunha Canal, the Sarah Johanna channel is now overburdened and does not have the capacity to drain both the areas intended to be served by the original Cunha Canal alignment and the agricultural areas intended to be served by the Sarah Johanna channel.  Rehabilitation of the canal would remove hydraulic restrictions, allowing these and other farming areas to be drained, and would allow for additional drainage capacity for the EDWC during storm events.

The project entails, the construction of a bridge across the Land of Canaan Public Road, fixing of the gate and upgrading of the sluice at the outlet of the EDWC as well as the construction of a new sluice into the outlet of the Cunha Canal into the Demerara River. The first sluice will serve as a regulator for water released from the conservancy and the second will control the discharge of water and prevent river water from entering the canal during high tides.

It is within this context that we, in the Ministry of Agriculture, consider ourselves privileged to be partners with the World Bank in the execution of this project. We express profound gratitude to the Project Management Office (PMO) within the Ministry of the Presidency for the provision of support thus far. Today’s activity will result in a more integrated system for the management of the D&I infrastructure in Guyana.

The Rehabilitation of the Cunha Canal has an estimated cost of US$3.2 Million, with 91.7% or US$3 Million from the Guyana REDD+ Investment Fund (GRIF) and the Government of Guyana contribution of US$ 0.27 Million or 8.3%.

Ladies and Gentlemen, rest assured that we are actively working to provide the necessary investments in infrastructure to raise your quality of life through proper drainage and irrigation. While there is much more to be done, I can assure you that my government is resolute in building more relief channels across the coastland, more sluices to release water into the ocean and rivers, installing more pumps to complement the sluices and increasing the holding capacity of our water conservancies. We will also expand the present irrigation system by greater connectivity to water sources, more capacity for irrigation canals and improve the irrigation pump capacities.

I would like to express my appreciation and gratitude to the Project Coordinator, Engineers and other officers at the Agriculture Sector Development Unit (ASDU) for their time and expertise in developing this project and urge them to continue to make this project a success.

Together we can restore our drainage and irrigation system which will offer a better way of life for all Guyanese.

Ladies and Gentlemen, I have great pleasure in officially launching the Cunha Canal Rehabilitation Project. 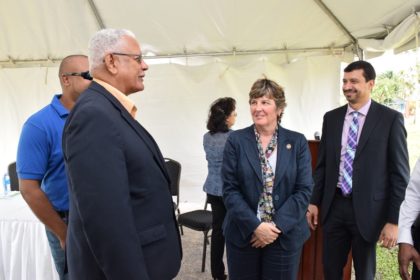 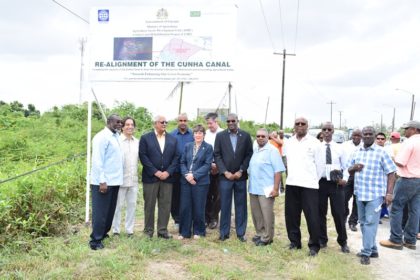 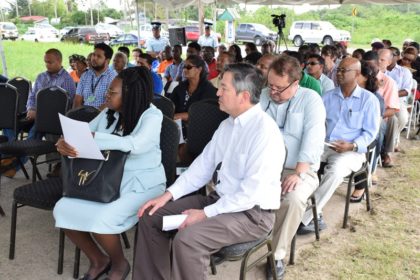 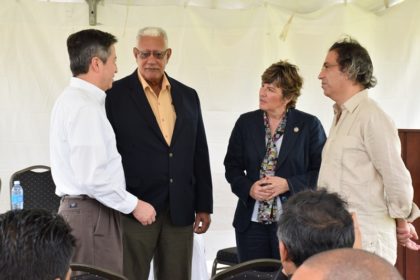