These are A Partnership for National Unity (APNU), the Alliance for Change (AFC), the People’s Progressive Party (PPP) and the United Republican Party (URP). The New Horizon Movement and Linden for Lindeners were the two independent parties that missed the 14:00hrs deadline to submit their list of candidates.

Scores of supporters dressed in their respective colours turned up at the office as they waited for their representatives to submit their lists. 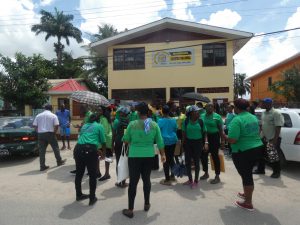 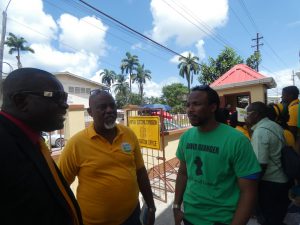 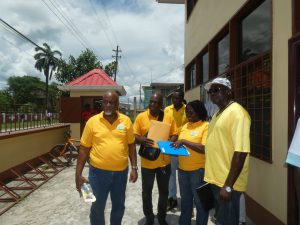 The AFC team after submitting the list to GECOM

First to do so, was the APNU and Campaign Manager, Valarie Adams-Patterson-Yearwood who said that the party will now begin canvassing. Yearwood noted that the preparation for Nomination Day has paid off.  “We work hard into the wee hours, so we have the output that is required and expected and as we go forward we are in full campaign mode right now.”

AFC Campaign Manager, Audwin Rutherford said that he is confident AFC will be victorious since it has the right combination of youth and experience. The AFC, he noted, has the interest of Linden at heart and will be looking carefully to see what can be done to initiate a better trajectory.

The PPP campaign manager, Akanni Blair was also confident of his party’s performance come November 12. “This LGE, we are excited about it and we believe that if the voting public gives us that opportunity, we are going effect change in Linden.”

The United Republican Party was led by community activists and the former councillor Eon Hall who confidently stated that the URP, with its youthful base, will capture seats in the municipality. He added that with experience reflected in the various community projects which he would have embarked on, the town of Linden will experience the change it deserves.