The final report of the Lindo Creek Commission of Inquiry (COI) will be handed over to President David Granger during this month. This was confirmed by the Commission’s Public Relation Officer Melanie Morris.

Currently, the commission is looking over some recommendations presented by family members of the June 2008 massacre, that could aid them in the process of moving forward. 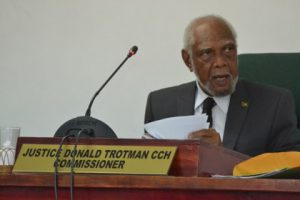 According to information received, close family members put together some recommendations that they believe would bring closure, while at the same time, keep the memories of the victims alive.

Some of those recommendations include offering scholarships to the children of the murdered miner, providing counselling for family members, and financial compensation.

The Terms of Reference (ToRs) of the Commission of Inquiry charged the commissioner to investigate and make findings of fact on all matters in relation to the killings of the eight miners in the Upper Demerara-Upper Berbice Region in June 2008. It will also make recommendations on actions to be taken against all persons and/or organisations that are deemed responsible for the deaths of those persons.

The Presidential Commission of Inquiry was established to enquire into the circumstances surrounding the killings of Cecil Arokium, Dax Arokium, Horace Drakes, Bonny Harry, Lancelot Lee, Compton Speirs, Nigel Torres and Clifton Berry Wong, on or about the 21st of June 2008 and to report the findings and recommendations to President David Granger.