“Since as a baby he would have difficulties doing things and it is only recently when we had the latest MRI that we were told it’s a problem with his brain,” his mother Adecia Johnson explained. 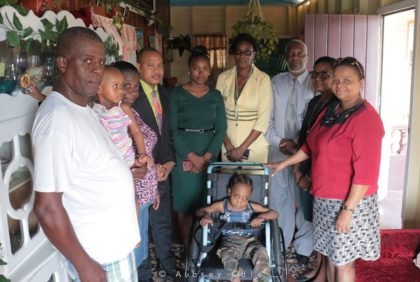 Little Alijah LaRose, with his grandparents, Hannah and Burnel Fraser (left), Childcare and Protection Staff and Minister of Social Protection, Hon. Volda Lawrence at his No. 5 Village home.

Alijah does not permit his brain-related ailment to come between his enormous quest for knowledge: ask him to name Guyana’s President or Prime Minister and many of their Cabinet colleagues and he will shout the correct answer.

Alijah cannot stand or walk and even though he has recently managed to colour, he still cannot write. He moves around by creeping, which makes it difficult for him to play with other children.

He was once a pupil of the No. 5 Village Primary School which is just across the road from his home, but due to several difficulties there, his mother was forced to transfer him to Sapodilla School of Excellence, a private school at Hopetown a few villages away. 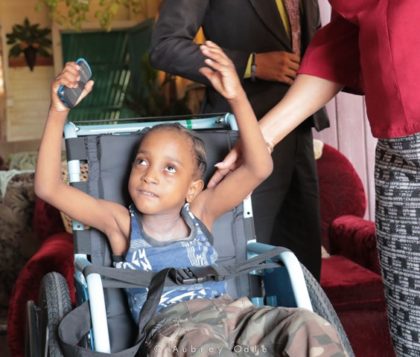 Johnson,describes him as a type of Rock of Gibraltar to the family. She admits though that the stabbing death of his father Leonard LaRose in May this year “was particularly hard on him”.

Alijah’s maternal grandmother, Hannah Fraser, a professional nurse, said the family first realised something was wrong with Alijah when at three-months-old he could not balance his head. He was able to do so until the eighth month.

“By eight months he couldn’t do many of the things we look for in children. He did them way after. So we knew something was wrong, but we were sure what. Now he does things, but long after most children. He takes a while, but we have seen improvements. On Saturday for the first time was able to stand by himself,” Fraser said. 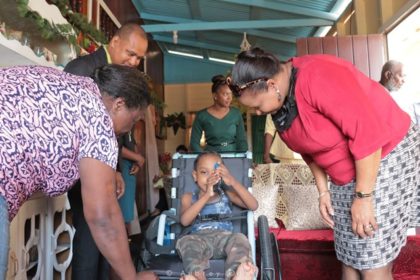 The child’s condition is a financial drain on the family, especially since his mom is now a single parent following her spouse’s murder on the job. She also has sole responsibility for taking care of the rest of the household.

Deepening her financial troubles, Alijah must have constant changes of clothing for home and school because of his condition and this too is a steep mountain for his mother to climb. Then there are the monthly expenses for critical medical supplies Alijah needs.

The Ministry of Social Protection gave Alijah a wheelchair to make life a little easier for him. According to his grandparents, they are happy for the gesture, as it would allow his family to take him around easier.

Alijah was a premature baby so from birth he needed extra care as a baby.

If you want to help you can contact the family on telephone number 675-3322.