“I would like to hope for the Liza Destiny, the partners and the crew, that it will bring us all the good things we anticipate, not only the profits or return of investment for Exxon and its partners, but also for the people of Guyana and in particular our children, a better quality of life, sustainable development and everything from which good oil will flow.”

This was the view expressed by First Lady, H.E Sandra Granger who was bestowed the honour of being the Godmother of Guyana’s first Floating, Production, Storage and Offloading vessel (FPSO). She was at the time delivering remarks at a reception for the arrival of the Liza Destiny hosted at the Guyana Marriot Hotel on Monday evening.

The event saw colourful cultural performances in the forms of dance, poetry and musical renditions. The event was also attended by Prime Minister, Hon. Moses Nagamootoo, government ministers and senior officials, members of the diplomatic corps and special invitees.

Director of the Department of Energy (DE), Dr. Mark Byone stated that the arrival of the Liza Destiny represents a historic milestone for Guyana. “Guyana is about to experience a tectonic shift in its development trajectory,” he said, adding that the estimated barrels of oil from the first major oil discovery in 2015 to date “is expected to be the main catalyst for this transformation.” 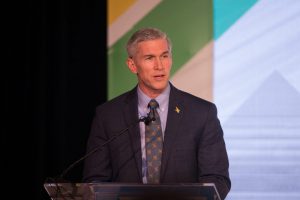 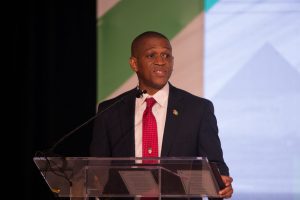 Director of the Department of Energy (DE), Dr. Mark Byone 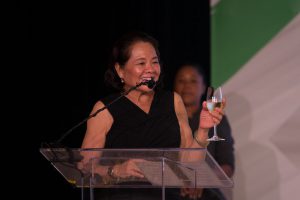 First Lady, H.E Sandra Granger, who was bestowed the honour of being the Godmother of Guyana’s first Floating, Production, Storage and Offloading vessel (FPSO) 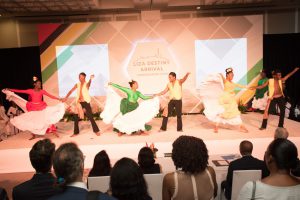 Rod Henson, President of Esso Exploration and Production Guyana Limited reiterated that the arrival of the FPSO marks a “turning point in Guyana’s history ushering in a future of enormous potential.” This, Henson said, will mean something different for each Guyanese, but all stand to benefit from the industry.

Henson said that as first oil approaches, the company is working closely with its partners and is “relying heavily” on their Guyanese workforce and local suppliers.

Earlier in the day, the First Lady, along with Dr. Bynoe, Minister of State, Hon. Dawn Hastings-Williams, Minister of Finance, Hon. Winston Jordan and Minister of Natural Resources, Hon. Raphael Trotman were given a tour of the vessel.

On July 18, the Liza Destiny departed Singapore for Guyanese waters and arrived three weeks ahead of schedule. The FPSO has a production capacity up to 120,000 barrels of oil per day and an overall storage volume of 1.6 million barrels.

During normal operations, there will be at least 80 persons living and working onboard the vessel. The release stated that twenty-four Operations and Maintenance technicians, who are currently being trained in Canada, will return in 2020 to support work on the Liza Destiny.

The Liza Destiny FPSO was transformed from the oil tanker, “Tina”, a VLCC [Very Large Crude Carrier] built by Hyundai Heavy Industries in South Korea. The contract for its conversion was awarded to SBM Offshore in July 2017. The converted VLCC FPSO will be moored in water with a depth of 1,525 meters and will be able to store 1.6 million barrels of crude oil.