The unexpected meeting with Councillor Dimitri Alli and His Worship the Mayor of Georgetown, Pandit Ubraj Narine, Minister of Natural Resources, Hon. Raphael Trotman and a group of Campbellville residents, took place this afternoon as the monthly statutory meeting of the Mayor and City Council (M&CC) was underway in the capital city.

“Many of them [residents] said they have never met their councillor, so I said the Council Meeting is a public place, I used to be a councillor once, let’s go meet the councillor. I’m sure he wouldn’t have a problem with meeting them,” said Minister Trotman.

This afternoon’s meeting occurred as a result of Sunday’s government engagement in the Campbellville area. During that engagement, the residents reported to the minister, their dissatisfaction with the non-service of their elected municipal representative. 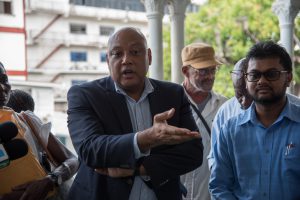 Minister of Natural Resources, Hon. Raphael Trotman addressing the residents as His Worship the Mayor of Georgetown, Pandit Ubraj Narine listens during an impromptu meeting at City Hall 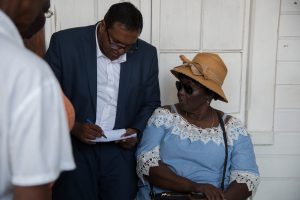 Today, as they met face to face, Minister Trotman told the Department of Public Information (DPI) that the intention was to be consolatory and let two sides meet each other.

“They [residents] were a bit intimidated to come and meet a man they have never met before that’s why I said I would come with them and help with the introduction.”

According to the minister, Councillor Ali came out of the statutory meeting and met with him and the group of residents.

“I’m happy to say that he excused himself from the meeting and came and was able to meet the residents… That is what local democracy is about. Today is a demonstration of the practice of local democracy,” Minister Trotman noted.

In the end, Councillor Ali said he would review the concerns outlined by the residents, and whether through the Ministry of Communities or the M&CC, seek to address those matters.

The councillor said a lot of what was raised was already in a plan but that he was awaiting whatever monies were made available.

The residents, in the meantime, reiterated that their community needed immediate attention.