Local orchestras to benefit from expertise of two maestros

Members of the Guyana Police Force and the Guyana Defence Force, the National Steel Orchestra and various choir directors will be able to improve their techniques and skills in the field of music.

In addition, band members of a number of national music orchestras are set to benefit from a 10-day workshop aimed at developing their level of musical productions and performances.

This announcement was made by the administrator for the National School of Music, Andrew Tyndall as he introduced the Maestros, Houlihan Robert and Adelino Mota of Portugal who will be facilitating the workshop. 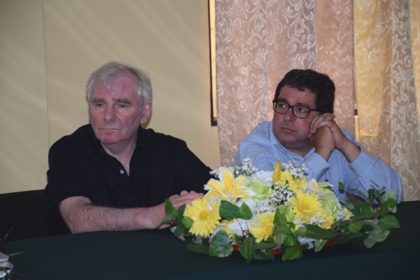 The two experts will be conducting these sessions, focusing on areas of orchestral conducting and the directing of music bands among other areas of music.

Tyndall explained that, “What we will be having over the next 10 days is a combination of workshops which will culminate with a concert on the 10th of September.”

The concert will be held at the National Cultural Centre and the group that will be working with the two maestros will showcase some of their skills learnt over the period.

Tyndall added that, “We will be playing a repertoire of music including Guyanese music, as well as music from other parts of the world, (which) include performances from the Guyana Police Force Band and from a mixed orchestra comprising members of the National Steel Orchestra, Guyana Defence Force, various drumming groups, string quartet and the Woodside Choir.”

Maestro Robert, briefing the press after his introduction said, “I think it will be interesting just to look back at the genesis of this project and how this came about. I got a phone call in January last year from the head of the EU Delegation here. I know him from a project that I was involved in Mexico where he worked at the Irish Embassy and we put together a concert of only Irish music. Since then we stayed in contact, but this idea came up when he was talking with Yvonne Cole about it and said I think I know the person who will be able to put something like this together.”

This workshop is fruit of a commitment by the European Union, to make a contribution to Guyana’s 50th Golden Jubilee Anniversary.

“We are very grateful to the European Union. This would not have been possible without their support. This is their contribution to Guyana’s 50th   Independence Anniversary so we are very thankful for that,” Tyndall added.

It is expected that at the end of the workshop, local music conductors will be better able to execute the duties of their position which will result in producing better performances.

The two maestros have been to several countries, facilitating orchestral conducting sessions.