─ “We remain confident in our case”

Attorney General (AG) and Minister of Legal Affairs, Basil Williams SC., said he is looking forward to the continuation and final day of hearings, into the December 21, 2018 vote, which is currently before the Trinidad based, Caribbean Court of Justice (CCJ).

Following oral submission at the CCJ on Thursday, AG Williams was “Impressed with submissions and is looking forward to tomorrow”. 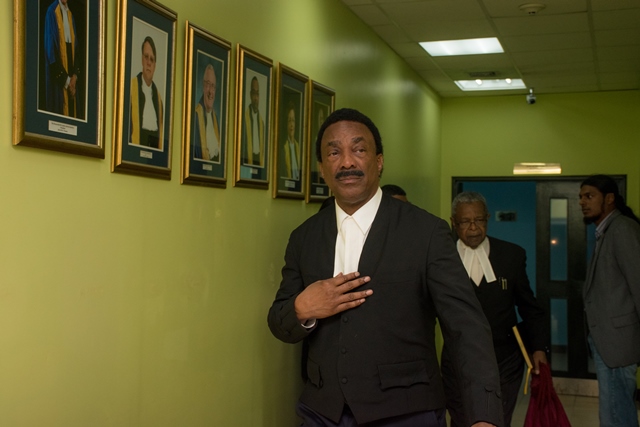 Both, AG Williams and Attorney-at-Law Eamon Courtenay SC., who made oral submissions on behalf of the Attorney General remained confident in government’s case. “We remain confident in our case and that the December 21st vote will be invalidated,” both stated.

In the meantime, during his oral submissions this afternoon at the CCJ, the Attorney General urged Justices, (CCJ President) Adrian Saunders, Jacob Wit, David Hayton, Winston Anderson and Maureen Rajnauth-Lee to uphold the Court of Appeal’s ruling.

Putting forth government’s motion of 34 votes to pass, rather than the 33, the country’s attorney general reiterated that “the principle is, the majority cannot be the same for simple and in absolute.”

In this argument, the government presents that given the fact that there is no half human or half vote, one had to be added to make it 34 for an absolute rather than simple majority in Guyana’s 65-member Parliament.

AG Williams also noted that the second highest court in the land had already spoken on this issue.

Back in March, the Court of Appeal ruled in a 2-1 split decision, that a majority of 34 votes would have been needed to validly pass a motion brought against the government on December 21.

Speaker of the National Assembly, Dr. Barton Scotland, who has been named as a respondent was also present.