Mabaruma Doctors save lives of mother & child with emergency C-Section

The Mabaruma Regional Hospital can boast of completing its first successful caesarean section (C-section) under local anesthesia and by local medical staff. According to reports coming from the region the surgery was not planned but doctors were forced to perform the surgery under the guidance and supervision of senior health officials in Georgetown.

26-year-0ld, Viola Daniels delivered a baby boy via c-section in the main operating theatre of the Mabaruma Hospital on Wednesday, June 28, after the medical team was unable to facilitate an emergency medical evacuation.

Regional Health Officer for Region One, Cerdel McWatt, noted that efforts were made to coordinate an emergency medical evacuation to the Georgetown Public Hospital Corporation which proved futile, leaving doctors at the Mabaruma hospital no other choice but to prepare the patient for surgery.

“This surgery serves as a key in a life or death instance for a high risk antenatal mother who arrived at the facility around 17:30hrs with severe abdominal pains. The patient was admitted and was found to be with a transverse lie.”

Transverse Lie is a sideways position. This occurs when the baby has his/her head to one of his mother’s sides and the bottom across her abdomen at her other side. This is normal before 26 weeks. However, Daniels was at full term of pregnancy. 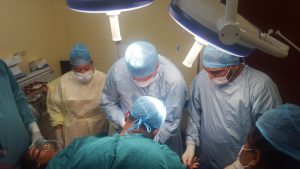 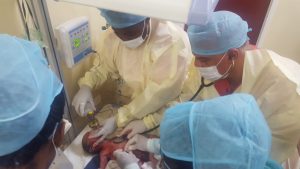 The doctors and nurses attending to the baby after delivery

After delivery, the baby was screened with a Low Apgar score however doctors continued to monitor the child and mother.

Regional Executive Officer of Region One was proud and honored to hear of such reports coming out of his region. He took the opportunity to thank the General Surgeon, Operating Theatre Nurses, Midwives, Doctors, Porters and Drivers who all joined forces in making the procedure a success.

Mitzy Campbell who originates from Mabaruma, Region reflected that a similar exercise was conducted in the region, in the 1960’s but was conducted by an Australian surgeon.

Editor’s Note: Apgar – (Appearance, Pulse, Grimace, Activity, and Respiration) This is a test to measure heart rate, respiratory effort, muscle tone, response to stimulation, and skin coloration of the unborn child. In the test each is scored on a scale of 0 to 2, with 2 being the best score; a score of ten represents the best possible condition.