The Ministry of Communities (MOC) through the Central Housing and Planning Authority (CH&PA) on Monday took a ray of hope to residents of Cocorite Hall Mabaruma, Region one (Barima Waini) when some 57 house lots were allocated to citizens there. 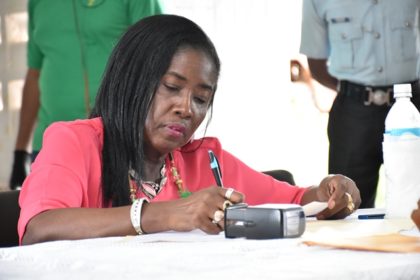 Minister within the Ministry of Communities Valerie Adams Patterson-Yearwood signs a transaction with one of the residents.

For the first time, Guyanese living in the community were given the opportunity to begin the process of owning their own homes. The CH&PA team which included Minister responsible for Housing, Valerie Adams Patterson-Yearwood took 57 vacant house lots to the community for distribution. Each of those lots was allocated to residents on the spot.

“Actually we came here from CH&PA with 57 vacant lots and I can say all 57 were allocated. And there are many persons are coming now with their allocation letters from 2014, 15, 16 but we are out of lots,” Minister Adams Patterson-Yearwood said.

Those 57 lots were all the CH&PA was able to deliver at the time, but according to Minister Adams Patterson-Yearwood, the housing authority will commence negotiations with the Regional Democratic Council (RDC) so that developmental works can commence on another plot of land to make house lots available.

Chief Executive Officer (CEO) of CH&PA, Lelon Saul said the CH&PA is committed to providing quality and affordable housing to all Guyanese. The CH&PA, he said, is also currently developing service lots, which include water, road, and electricity among other infrastructure. All this, he said, is aimed at improving the quality of life for all Guyanese.

“One of the things we recognize is that you owing a piece of land… it allows for the generation of wealth and I believe that it is our intention for people to live the good life and if you do not have that capacity to generate wealth then the whole dream of living the good life will become difficult, if not impossible.”

As the CH&PA moves to expand its housing drive, Saul said the intention is to open up a regional office in Mabaruma, to make it easier for residents to make payments for their house lots. 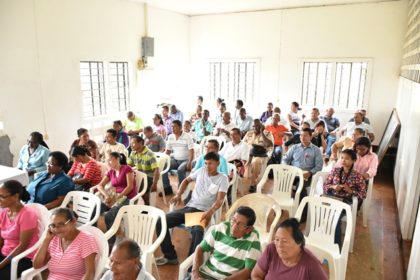 Residents of Cocorite Hall, Mabaruma meet with Minister within the Ministry of Communities Valerie Adams Patterson-Yearwood on Monday to receive their house lots. 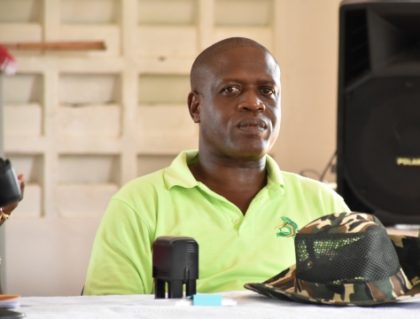