Students of the Upper Six level of Mackenzie High School, Linden, will be able to graduate in the traditional way following a $155,000-donation by Minister within the Ministry of Natural Resources, Simona Broomes. The contribution will go towards the purchase of graduation caps and gowns. 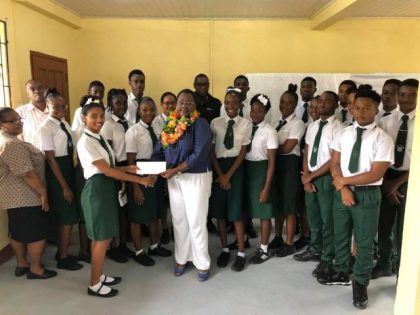 Minister within the Ministry of Natural Resources, Simona Broomes handing over the contribution to the students of Upper Six level of Mackenzie High School.

On April 4, Minister Broomes presented the funds to the students in a simple ceremony. The Upper Six students, who solicited her assistance, will be the first sixth form class to graduate with caps and gowns after 71 years of the school’s existence.

Minister Broomes revealed that her children assisted with the donation, “together, as a family, we said that we were going to put the money together to ensure that this change they want to bring about can be possible”.

Tamar Wilson, one of the Upper Sixth students, in an invited comment, said “the tradition has it that sixth formers have been coming to Mackenzie High School and when they write exams, there is no graduation to actually show that we actually attended this institution. We want to be the change for Mackenzie High School,” Another student, Faith Benn, said that she along with classmates and teachers collaborated and held several fundraising activities for the graduation to be a reality. “We are the trendsetters, so we started with various activities such as a culture day, old folks party, hot dog sale and so on.”

The Principal of the Mackenzie High School, Haslyn Small said that the contribution will not only benefit this batch of students but also the other batches to come. “This gesture will go a far way in terms of setting the standard for the future graduates in particular. Now that we have the monies to purchase the gowns, the gowns will now be used in future for other graduates and we thank the Honourable Minister.”