(Georgetown, July 8, 2016) – At this year’s National Grade Six Assessment (NGSA) the top spot was successfully achieved by Anthony Ferreira of Mae’s Under 12 with 568 marks. Anthony was joined by several of his classmates who were all in the top One Percent of students who did exceptionally well at the 2016 NGSA. These include Divya Nandalall, Riley Nurse, Joel Singh, Vinaya Chatterdeo, Ayushi Nandall, Joshua Gulab and Keshav Doodnauth, The students were honoured by their teachers, parents and fellow classmates at their annual graduation ceremony at the Ramada Princess hotel at Providence. 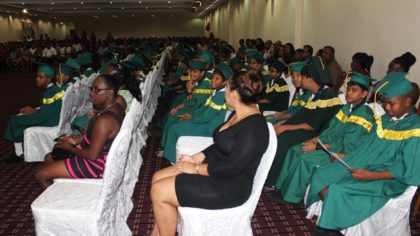 “Mae’s Under 12 stands out like a beacon,” declared the Minister within the Ministry of Education, Hon. Nicolette Henry in her remarks. That declaration was welcomed by resounding applause by the many elated parents gathered at the graduation ceremony. The Minister recognized that over the years the institution has been faced by many challenges but has been able to make a positive impact on the lives of the students who attend the school.

“I’m sure everyone knows from their science class what a seed is. When you plant a seed in healthy soil, you don’t get a seed but a plant. The harvest is always greater that what is planted as long as you nurture them properly. This principle applies to you right now,” she said.

Minister Henry urged the students to remember the encounters they had while at the school as these would have helped them to be better people. “Bear in mind the promises you made to yourself and others, and keep in contact with those who have touched your lives,” the Minister added. 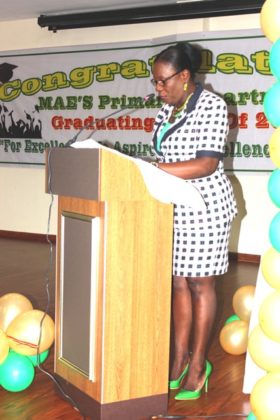 After recognizing that all the students did well, with some being awarded the schools they wanted and others did not, Minister Henry noted that their disappointment should make them stronger. “Tough times never last but tough people do,” she emphasized.

“I ask each of you to keep your dream alive, and take time today to thank the people behind the success of this momentous event – your family for their encouragement, unconditional love and support; your teachers who discussed not only their lesson plans but also the lessons of life; your fellow classmates who took part in molding your personality and who were always considerate during difficult times,” Minister Henry advised. 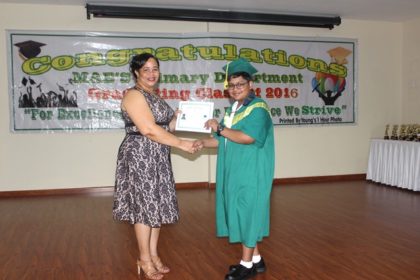 Ninty-one 91 students from Mae’s Under 12 sat the 2016 NGSA and 41 of them were awarded placements at the senior secondary schools.