Director of Prisons (acting) Gladwin Samuels said that the expansion of Mazaruni Prison is moving apace.

In the 2018 National Budget, the sum of $1.5B is allocated to the Guyana Prison Service, of which a sizeable amount will go towards continuing the expansion of the prison, with the construction of a new brick wing to house an additional 400 inmates.  The penitentiary currently houses 452. 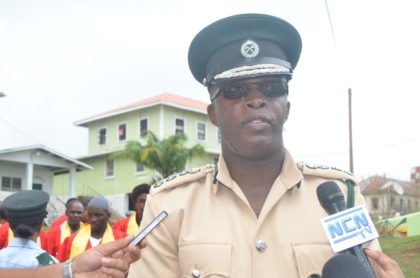 Samuels explained that in keeping with the expansion, twelve new family quarters have recently been constructed on the compound of the prison. These quarters are a prerequisite to the construction of the new brick penitentiary. They will house the additional prison officers that would be needed to manage the expected increase prison population.

“Most people expressed concerns as it relates to being transferred because they have to leave their families behind and taking that into consideration, the need for additional housing and appropriate housing for persons who would have to leave the comfort of their home has been considered and that resulted to the initial construction of 12 houses and we will be doing eight additional houses in 2018,” Samuels stated.

The Director of Prison (acting) also disclosed that come 2018 the facility will also benefit from 24 hours electricity.

According to Samuels, the move to have 24 hours of electricity is one that will prove to have multiple benefits, especially to the inmates who are a part of the skills training programme that is offered by the prison.

“Proper skilled training cannot be done without the proper power tools and the fact that we only have electricity during the hours of darkness, it meant that the opportunity to allow prisoners to mean fully utilise those power tools for the training is not realised. So, with the installation of a brand-new generator at this location, the rewiring of the entire compound and the use of the existing generator, we will be moving towards 24 hours electricity,” he explained.

The process is expected to commence today and according to Samuels, it should take less than a week. Additionally, it was highlighted that the new state-of-the-art prison will also be using solar panels to complement the use of generators.