The Minister of Youth Affairs stopped at the stopped at several homes along the West Coast of Berbice where the children and their parents reside. Among them was 14-year-old, Orissa Noble.

Noble was among several students returning from school on a David ‘G’ School bus plying the route along the West Coast Berbice Public Road when disgruntled protestors pelted glass bottles and other objects to the bus. 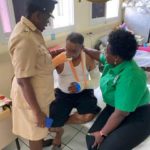 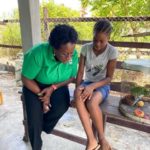 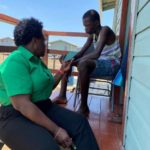 The Fort Wellington Secondary School told the minister she never expected the bus to come under attack and was traumatised.  “I don’t want to remember what happened yesterday,” Orissa said.

Moriah Jaque another student in the bus remembered hiding under the seat and fainting. “We are innocent. No child in Guyana should go through this,” she shakenly recalled.

Reon Mobb also of Fort Wellington Secondary School suffered a gash to his head after a glass or glass bottle, he believed, struck his head. By the time he sought to secure himself, he realised he was already bleeding.

Christopher Srikishun of Blairmont, Jaguar Philander of Ithaca Village and Beyoncé Noble of Belladrum were also students on board who received visits from Minister Broomes.

After visiting homes of the children, the minister noted that the actions of the protesters have been condemned. “You have children … why would you attack a bus carrying children? They should be ashamed,” she said

Sergeant Punit Nauth Ibaran of the Blairmont Police Station was one of the officers injured when the ranks attempted to quell the protests. He was visited by the minister at the New Amsterdam Regional Hospital where he is currently recovering.

Ibaran said he was doing his job which is to provide service and protection. Instead, he was met with a slew of insults and was then attacked, “I am a police officer to serve and protect. But they felt that I am against them,” he said.

Also visited by Minister Broomes  was Tissie Wallerson, a Riot Unit officer on Number 30 village, West Coast Berbice. Wallerson recovering from a severe injury to her foot after trying to flee the crowd.