The items were officially presented to Minister Norton by Chandini and Khishan Singh, children of the company’s proprietor, Komal Singh.  The simple handing over ceremony was done at Minister Norton’s Main Street office on Friday, April 26, 2019.

According to Khishan Singh, Gaico Construction has always been keen on its corporate social responsibility, and is usually examining ways of improving the lives of disenfranchised Guyanese. 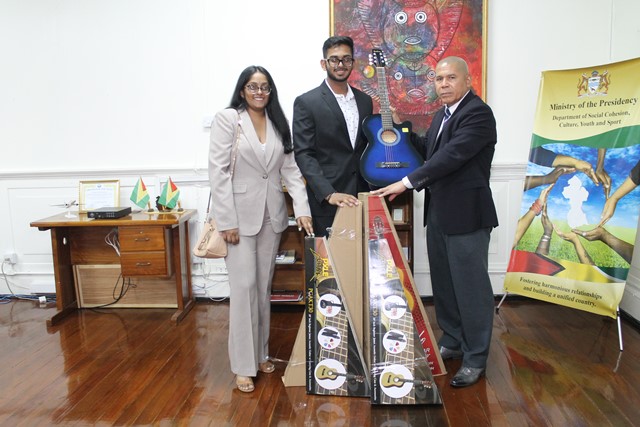 The young man said that the company was inspired by Minister Norton’s recent donation of a guitar to the Village of Paruima in Region Seven, and wanted to be part of a similar exercise.

“I believe that music is quite an important part of one’s life. I can tell you from experience that playing an instrument is really beneficial to a person’s overall development. It helps to cultivate more creative minds while maintaining focus and discipline as an individual,” Khishan Singh said.

Recognizing the disparity that exists between opportunities available on the coastland as compared to those in the hinterland, the Singhs are hoping that like Minister Norton’s previous donation, theirs would also benefit a far flung community.

In expressing his gratitude for the donation, Minister Norton committed to ensuring that the instruments benefit those with limited access to the many opportunities available along the coastland.

“As you know, it has been a struggle throughout the world to maintain the authenticity and richness of various cultures. Here in Guyana, our Indigenous communities are more at risk of losing precious aspects of their heritage, including language and music,” Minister Norton pointed out.

He noted however that there are still persons in certain villages who live in Benab and observe the sacred tradition of gathering at nights to tell stories and sing songs.

“The simple donation of a guitar would go such a far way in motivate and helping those people to maintain such traditions and keep their cultures intact,” Minister Norton assured.