─road and bridge to be repaired

MOPI: Nov 5, 2019: The Minister within the Ministry of Public Infrastructure, Honourable Jaipaul Sharma on Friday morning met with concerned residents of Houston and Agricola, East Bank Demerara and assured that their road and major bridge respectively will be examined by engineers shortly, to have them repaired.

Accompanying Minister Sharma on the visit was the Mayor of Georgetown, His Worship Ubraj Narine. The duo together listened to the issues highlighted by the residents in Back Street, Houston.

Minister Jaipaul Sharma and Georgetown Mayor, Ubraj Narine take a walk on Back Street Houston to hear the concerns of residents 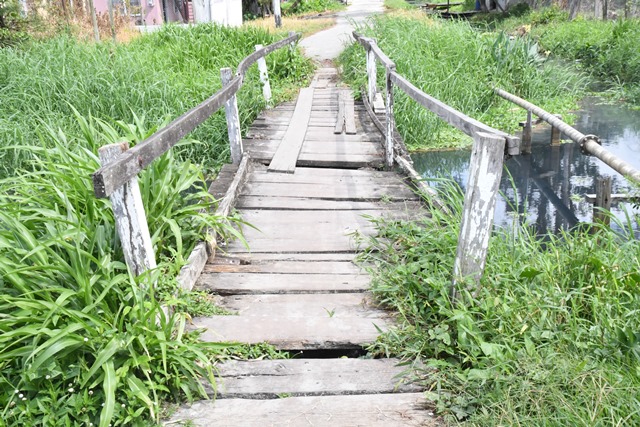 The leaders were told that the street has been lined with potholes for years and becomes almost impassable when it rains, posing a major hurdle especially for students who would use the road to get to school.

Minister Sharma explained to the residents that the rehabilitation of the road and the construction of concrete drains could cost approximately $80 million, considering its length. However, to allow for a faster solution, he explained that the possibility of laying a crusher run surface on the street for an immediate resolution will be examined. The Minister added that an asphaltic concrete layer will be done if there are sufficient funds.

In Agricola, Minister Sharma and the Mayor’s attention were brought to a tyre shop on the Public Road which had tyres impeding access to the walkways and large vehicles encumbering the public road. Minister Sharma was told that children attending schools in the vicinity are forced to walk on the major public road since the pavement is usually encumbered by vehicles seeking the services of the tyre shop.

Residents were advised by Minister Sharma to seek the intervention of the Environmental Protection Agency (EPA) and City Hall as well as the Guyana Police Force.

Further along, the Mayor and Minister visited Flour Mill Road where a pedestrian bridge over a trench was in a notably deplorable state. One resident relayed that a child recently broke her hand after falling from the bridge when a rotted board broke. The resident added that the condition of the bridge is especially dangerous since the trench is infested with snakes.

Minister Sharma committed to sourcing the materials as early as possible to facilitate the bridge’s rehabilitation. The bridge has reportedly been in a bad state for over 20 years according to one resident who recalled using the very bridge to get to school. She explained that to date, school children from Sol Road and other nearby streets would cross the bridge to get to their various educational institutions.