(Office of the Prime Minister, July 25, 2016)- Vice President and Minister of Indigenous Peoples’ Affairs, Sydney Allicock has pitched the idea of a bridge across the Essequibo River at Kurupukari along with an attached small hydro-electric generating facility to provide electricity for the bridge, nearby communities and the Iwokrama River Lodge and Research Centre.

The Vice President’s idea was floated with the Prime Minister during a two-day visit to Regions 8 and 9 where they met with residents in several villages including Annai, Surama and Fairview. 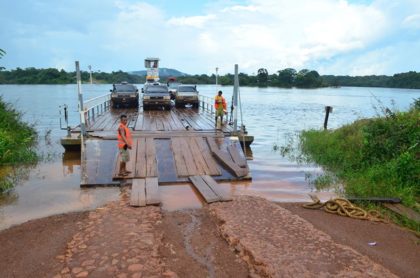 Minister Allicock, who is from Surama in Region 9, took Prime Minister Nagamootoo and a team on an Essequibo river survey in proximity of the Kurupukari Crossing to explain in detail the idea for the long mooted bridging of the Essequibo River.

Minister Allicock explained to the Prime Minister that a possible bridge design can be in three sections across the river, bridging the two nearby islands. He also suggested that the bridge design could include a viewing platform for tourists as the nearby rapids could be marketed as a tourist attraction as is done in other parts of the world. 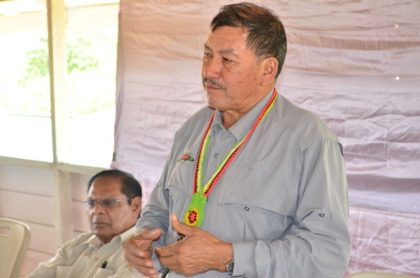 Currently persons travelling the Linden/Lethem Trail cross the Essequibo River, at Kurupukari, by a river ferry operated by a private company.

Prime Minister Nagamootoo and Vice President Allicock were also briefed on the ongoing works to extend the airstrip at Fairview. The extension is being done to allow for larger aircraft to land which will provide easier access by tourists to the Iwokrama River Lodge.

Increased tourist arrivals at the Iwokrama Lodge will have positive spill off effects for the residents of Fairview, several of whom work as tour guides and in other capacities at the Lodge. 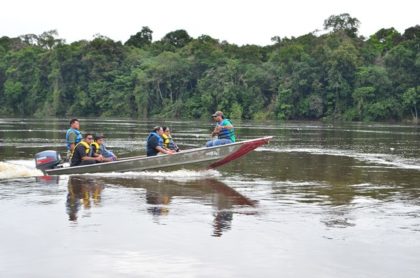 Prime Minister Moses Nagamootoo and VP Sydney Allicock and team on a survey trip on the Essequibo river in the vicinity of the Kurupukari crossing.

At the conclusion of the meeting with residents of Fairview, the Prime Minister made donations of solar LED lights to assist children of the community to study at nights, along with books and sports gear including footballs and volleyballs.