Minister within the Ministry of Indigenous Peoples’ Affairs the Honorable Valerie Garrido-Lowe was among hundreds who witnessed the hoisting of the Golden Arrowhead and the Regional Flag of Region 9, Thursday evening, when that region celebrated its Indigenous Heritage Celebrations 2017.

St. Ignatius Village is the host of the four days of activities which commenced on Thursday and has attracted villages from North, Deep South and South Central Rupununi. 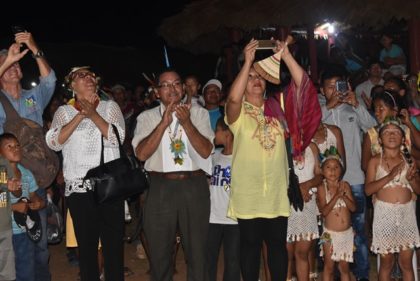 Before the flags were hoisted Minister Garrido-Lowe congratulated regional officials and the host village in addition to those who contributed to making the event a success, by ensuring that rich indigenous culture is preserved.

The Minister took the time to remind the gathering of the significance the Month of September holds for the indigenous peoples throughout Guyana noting that “we have such an incredibly rich heritage, our customs and traditions have stood through the years hence as the first peoples of this country, our presence is strong and will remain strong for thousands of years to come, our ancestors have left us really a rich legacy one which we are so proud of today”.

Minister Garrido-Lowe has assured residents of Region 9 that the indigenous peoples, their cultures and traditions, villages and economies will prosper under the David Granger led Coalition Government.

The Minister also reminded residents of the tremendous potential that the region and the people possess which according to her, will ensure the indigenous peoples of today “contribute meaningfully to the legacy our ancestors have left us”.

She said Agriculture and Eco-tourism stand out as two main areas where the indigenous peoples who are dubbed worldwide, the protectors of the environment can make a significant contribution.

Focusing her attention on diversification of the Agriculture sector, the Minister pointed out that Lethem is heavily dependent on neighbouring Brazil for meat especially chicken. She has since encouraged villages to venture in large scale poultry production so that their economy can be a model for others to follow. 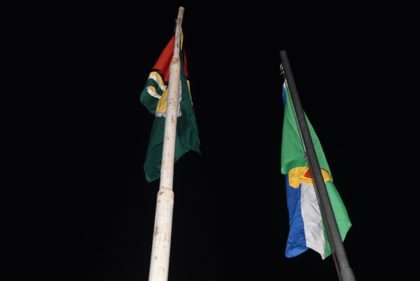 “Can you imagine you eat here approximately four thousand pounds of chicken a day and guess where the chicken is coming from, Brazil, so why can’t we grow our own chickens, this is what I am talking about, we have to start supporting ourselves, our communities and our region, but the only way we can do it is by coming up with a plan. So our legacy should be that we are going to contribute to Guyana’s revenue base. We could become business people, producers of livestock that will sustain the region and the country”.

he Minister has been championing the “what will you leave legacy” cause which also serves as motivation for the indigenous peoples since they have tremendous abilities that can ultimately be unmatched.

Regional Chairman Allicock in brief remarks said he was proud of the residents of Region 9 for their support shown towards realising their regional flag, which is a demonstration of unity that abounds.

The regional flag was hoisted for the first time Thursday evening.

St. Ignatius which is approximately a mile inside Central Lethem is home to more than fifteen hundred residents and is ably led by Toshao Yusa Xavier and Council.

Toshao Xavier also thanked everyone for the support and assured that camaraderie will always remain in her village which will be extended through the region.

Meanwhile, the 2017 Heritage Games hosted in South Central Rupununi has attracted locals and foreigners alike, with attractions in sports and cultural presentations, indigenous foods, beverages and craft on display.

Thursday evening saw several groups from throughout the Rupununi participate in dance, drama, poetry and singing to a fun filled audience.