Residents of several communities within the sub-district Mabaruma, Region One were afforded the opportunity to raise critical concerns, and share ideas for their communities’ development with a government team, during the period April 18-20. 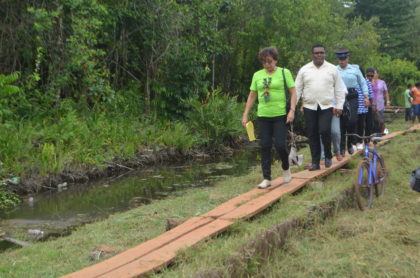 Minister within the Ministry of Indigenous Peoples’ Affairs Valerie Garrido-Lowe leads villagers across the catwalk in Barabina, Region One.

During the visit to Barabina, Minister Garrido-Lowe commissioned a catwalk which was built by the residents using their Jubilee grant of $1.5M. The structure stretches 812 feet and is benefitting 475 residents. It was built to allow free movement of people in and out of the community, as the roads that lead into the community have deteriorated and are flooded when it rains.

The Minister commended the residents for the project, adding that while the government will commit to ensuring the roads are fixed, the building of the catwalk is the first step in the right direction. “We are going to do the road, but this is the first step towards easing the problem that you have here in and out of your community… at least movement towards rectifying this problem for the community is being seen,” the Minister stated.

However, residents of the community suggested to the Minister that lights be installed along the catwalk as it dangerous to cross the catwalk at night. Minister Garrido-Lowe agreed and has committed to alerting the Ministry of Public Infrastructure of the need for the lights. 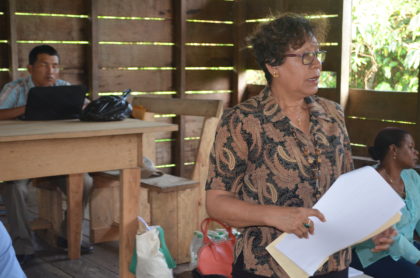 Minister in the Ministry of Indigenous Peoples’ Affairs Valerie Garrido-Lowe speaking to residents of Tobago Village, Region One

“Our capital grants and projects will still be rolling out, and we expect you to take full advantage of capital funds available, make good use of them and submit your proposals very early,” the PS urged.

The Ministry of Indigenous Peoples’ Affairs is looking forward to working along with the community to rollout their 2017 projects, King stated.

Additionally, the Minister and team visited the small village of Tobago which has a population of 191 residents. One of the main concerns coming out of the meeting is the inability of students to attend school due to the distance they have to walk. This is due to the fact that the bus which was bought for transporting children to and from school was damaged and is awaiting repairs.

This immediately got the attention of both Minister Garrido-Lowe and PS King. Deputy REO, Tikaram Bisesar was called upon by the Minister to assist and has committed to transporting the children to and from school until the bus is repaired.

Another pressing issue in the community is the lack of jobs. However, while in discussion on the way forward, Junita Bumbury, a resident of Tobago proposed to the Minister and team that she wants to establish a bakery through a women’s group. The idea was lauded by the Minister who noted that it would create employment, and aid in the community’s development.

“Discuss it among yourselves, what you need for this bakery, how much bread you want to produce per day or if you are baking twice per week, everything, the cost of every item that you will need, but that is a fantastic idea,” Minister Garrido-Lowe emphasised. 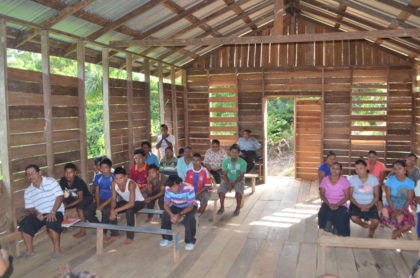 Residents of Tobago Village during their meeting with Minister within the Ministry of Indigenous Peoples’ Affairs Valerie Garrido-Lowe, Permanent Secretary in the Ministry, Alfred King and team

Minister Garrido-Lowe also advised residents that the Hinterland Employment and Youth Service (HEYS) will be coming to their communities no later than July 2017. The government, the Minister said is working to ensure that it fulfills its promise to take the programme to all 212 indigenous communities.

In 2016, the programme was rolled out in 112 communities across the country. In 2017 the Ministry will be rolling out the programme in the remaining 100 communities. The sum of $941M was allocated in the 2017 National Budget for that purpose.

Minister Garrido-Lowe urged the residents to be prepared for the programme as it is aimed at empowering young people. The programme, the Minister said, needs the buy-in of the residents as they would need to identify a location where the classes can be held and decide on two skills that would be of benefit to their respective communities.

Added to the two skills which will be taught, the youths will be trained and certified in areas such as garment construction, carpentry, joinery and entrepreneurship. It entails six months each of classroom and practical training. Participants also benefit from a stipend, as well as business mentoring. 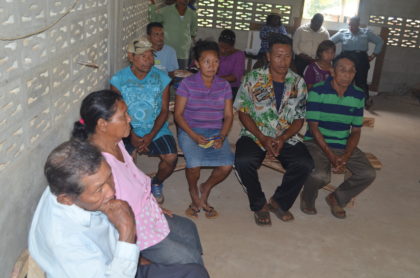 Residents of Khan Hill village, Region One during their meeting with Minister within the Ministry of Indigenous Peoples’ Affairs Valerie Garrido-Lowe, Permanent Secretary in the Ministry, Alfred King and team