Fallen men and women of the armed forces were today honoured at the 2016 Remembrance Day ceremony.

Minister of Foreign Affairs, Carl Greenidge, performing the functions of the President, together with veterans, members of the Cabinet, the Joint Services, the diplomatic community and a large number of Guyanese gathered at the Cenotaph on Main Street, Georgetown for the ceremony.

Acting President Carl Greenidge taking the salute at Remembrance Day parade after the laying of wreaths at the Cenotaph.

Minister Greenidge, in his  statement, recalled those persons, who, through the years have made  personal sacrifices in the continuing struggle for human dignity, social justice and freedom from all forms of oppression.

Greenidge said, “we are forever indebted to them for their supreme sacrifice in the cause of peace and freedom. Their example strengthens our resolve to maintain our efforts for a world at peace with justice, and prosperity for all peoples.”

Greenidge urged the gathering to remember those Guyanese who, since Independence, have made sacrifices for Guyana, and died executing those services.

He acknowledged those working assiduously to defend “our territory and our patrimony throughout our country.”

A wreath-laying ceremony was held where Commissioner of Police, Seelall Persaud, members of the Diplomatic

Minister of Foreign Affairs, Carl Greenidge,performing the duties of President, taking the salute at the Remembrance Day parade after the laying of wreaths at the Cenotaph.

Corps and representatives of regional and international bodies and organisations participated.

Additionally, the ceremony was preceded by prayers from religious leaders of the Christian, Muslim, Hindu faiths and a two-minute silence, during which attendees were encouraged to think or pray “in remembrance of those who made the great sacrifice.”

After the ceremony, Greenidge was given a military salute, during a march past by the Joint Services, and members of the Guyana Veterans Legion Association at the corner of Main and New Market streets.

Remembrance Day is observed in Commonwealth countries on the second Sunday of November.The War Memorial also known as the Cenotaph was unveiled on August 14, 1923, by the then Governor, Graeme Thomson.

It is a national memorial to Guyanese soldiers who lost their lives in the First and Second World Wars. Inscribed on it are the words: Devotion, Humanity, Fortitude and Sacrifice. 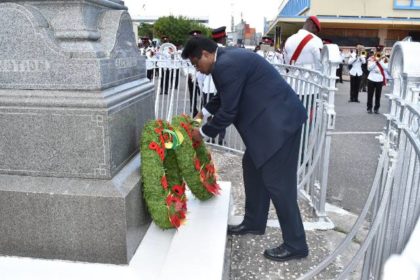 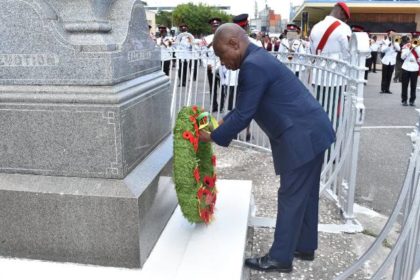