Georgetown, Guyana – (June 17, 2016) Minister of State, Mr. Joseph Harmon, today, met with representatives from several ministries and government agencies to discuss a multi-stakeholder approach towards the completion of a developmental plan for the Mocha Arcadia Community. 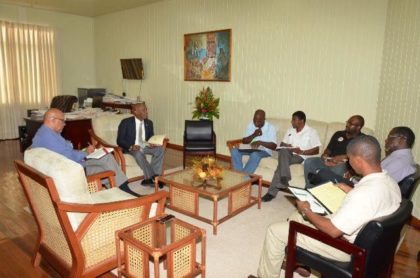 The meeting is a follow-up on issues relayed to the Minister, earlier this month, when he met with some Mocha residents, including the Chairman of the Neighbourhood Democratic Council. Minister Harmon noted that despite the hardships Mocha has persevered and the meeting “aims to co-ordinate work in a small community where we can help to make an impact on issues affecting residents.”

He specifically asked the meeting to identify projects that can be extracted from plans that have already been catered for in their budget to draft a community development plan for Mocha. The Minister noted that the community was challenged by land distribution and land use issues, electricity and water woes and dilapidated roads. However, he pointed out that the Guyana Lands and Surveys Commission is already addressing the matters related to land the land issues.

Meanwhile, Dr. Van West Charles said a group from Barnwell, Mocha Arcadia had approached the utility a few months ago about access to potable water and the company is in the process of installing some pipelines. Nevertheless, he said, “We can take a close look at any resident, who is having difficulty and try to address them because we’re trying to interconnect the system so even the well at Providence would be able to supply them, shortly.”

Mr. Castello also revealed that the Public Infrastructure Ministry recently installed 52 streetlights, which will be activated next week. Minister Harmon reminded that any new projects should be sustainable, in keeping with the Government’s green agenda.

Mr. Wilson, who said that he moved into Mocha in 1994, remarked that communities north of Barnwell North and at Prosperity have no electricity and that “the kind of farming that the people have been advised to do there; they will need power… power for water, animals, for their children”.

Additionally, Mr. Flatts said the Agriculture Ministry has embarked on a comprehensive drainage and irrigation plan in Mocha since July 2015. A bulldozer truck and long-boom excavator have been stationed there and, to date, has bulldozed 18 miles of dam and cleared 20 miles of drainage channels.  He also noted that plans are in train to access funds from the CARICOM Development Fund and from the 2016 National budget to augment those works next year.