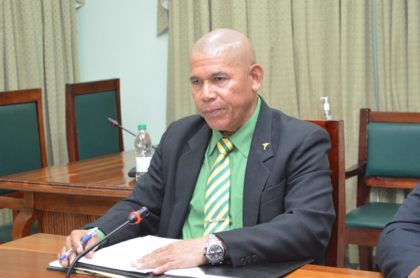 Minister of Public Health, Dr. George Norton issuing a press statement to members of the media, today, at Parliament Building.

Responses by the minister to questions posed earlier this month by members of the Parliamentary Opposition on the rental of a building as a facility to store medical supplies, have been the focus on numerous public comments and widespread attention.

Shortly after meeting with the Speaker, Minister Norton met with members of the media and read the following statement:

On Monday, August 8, 2016 during consideration of the estimates in Financial Papers Number One and Two of 2016, I was questioned extensively by the members of parliament representing the PPP/C. In the process, I gave answers that were in some parts based on my personal knowledge and ability, and in other parts, based on information and advice presented to me.

Since August 8, 2016, I have come to the firm position that the answers given to two questions relating to the payment to new GPC Incorporated and the storage of drugs in the bond at 29, Sussex Street, Georgetown were not accurate as these were based on information supplied to me.

In these circumstances, I wish to extend my sincere and profound regret to His Excellency, Brigadier David Granger, President of the Co-operative Republic of Guyana, Honourable Barton Scotland CCH, MP, Speaker of the National Assembly, Prime Minister Mr. Moses Nagamootoo and my parliamentary colleagues of the APNU+AFC, members of the Parliamentary Opposition, and all others who were present or able to observe the process of the consideration of the estimates relative to payments to new GPC incorporated and Linden Holdings Inc.

As Minister of Public Health, I know that a high standard of duty and care is expected of me and the staff of the ministry of Public Health so I take full responsibility for this unfortunate episode and give my full commitment that it will not recur.”

Minister Norton, when asked by the media if he thinks he should resign, responded thus; “I have been a health care giver for all of my professional life for about three decades, even in my recently acquired position as Minister of Public Health I continue to do so. I have admitted that I made a mistake of which I take full responsibility for, assuring you that every effort will be made that this will not recur and I am still committed to offering the delivery of health care to the nation.”

It is expected that a written apology will be formally presented to the Speaker of National Assembly by the Minister of Public Health shortly.