Georgetown, Guyana – (November 2, 2018) Minister of Public Affairs, Ms. Dawn Hastings-Williams, this morning, made the first contribution to the Salvation Army’s ‘Christmas Kettle’ at the launch of its 2018 Christmas appeal, which was held at the Georgetown Club.  Minister Hastings-Williams, who represented President David Granger at the event, expressed the hope that her action would be replicated by the rest of the nation. 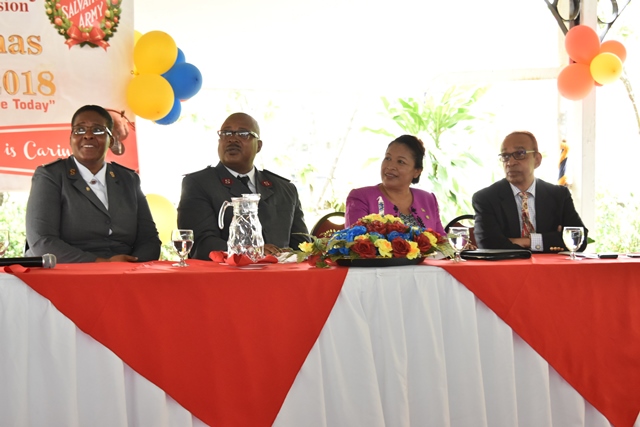 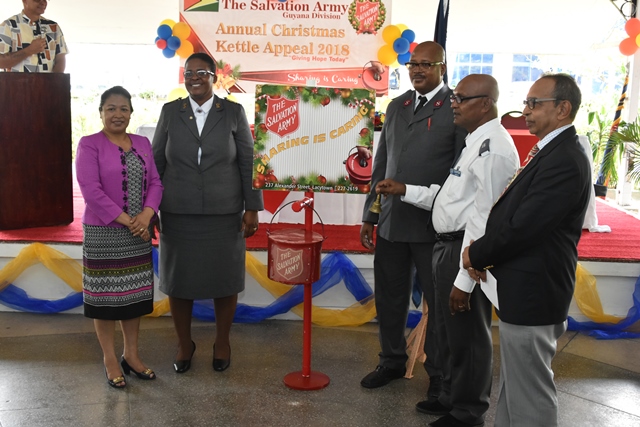 Minister of Public Affairs, Ms. Dawn Hastings-Williams (first, left) and other members of the Salvation Army at the launch of the ‘Christmas kettle’ appeal at the Georgetown Club.

“I truly believe that the true spirit of Christmas consists [of] giving, especially giving to those in need… Bearing this in mind I call upon all the citizens of Guyana, especially the corporate sector and the diaspora to please contribute generously to the worthy charity works of the Salvation Army, planned for the Christmas season and 2019,” she said.

The Salvation Army provides assistance to persons who are enduring emotional, financial and other challenges.  The charity provides food and clothing for the poor, vulnerable children, the elderly, provides daily meals for underprivileged persons, assists persons in nursing homes and hospitals and purchases gifts for children during the Christmas season.  This year, the charity plans to donate over 1,200 food hampers to those in need, host several parties across the country for underprivileged persons and to start carolling and gift giving from the second week of November.  Funds raised from the Christmas kettle are used for these projects.