Minister of Education, Dr. Rupert Roopnaraine has broken his silence on the misunderstanding being peddled by sections of the public and media with regards to the development of D’Urban Park and his role in it.

In a statement today, to the National Assembly, the Minister said that he found it distressing that those who maligned the project failed to acknowledge the energies of those who were involved in the significant work to develop D’Urban Park for Guyana’s 50th Independence Jubilee. He noted instead, that “greed and malice” have been attributed to these persons’ patriotic effort. 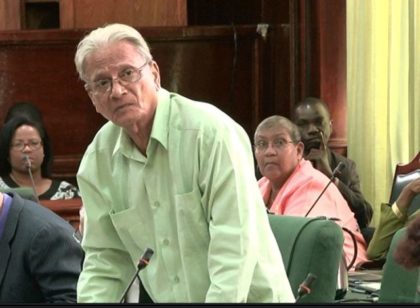 Minister of Education, Dr. Rupert Roopnaraine offering the House a clarification to the nation on the funding for the D’Urban Park Project

On a more personal note, the Minister added that in almost 40 years of his political activism, of striving to achieve a better Guyana, he has “never hidden behind anybody.” Further, he said that he has never, “engaged in any acts, given off even a whiff of malfeasance” and he deeply resent any whisperings or hints in the media to that effect.

He promised the Assembly that he would not sit by and suffer in silence, “if I am now accused by anyone of such acts.”

Minister Roopnaraine, who sought to set the records straight, explained that on July 2015, the National Commemorative Commission (NCC), was established when the government decided to celebrate the 50th Jubilee Anniversary of Guyana in an appropriate way.

The Minister explained that he was appointed to chair the proceedings of the NCC. He said that the Opposition was invited to be a part of the Commission, but that they never attended any of the meetings, nor made any other contribution to the work of the Commission.

Minister Roopnaraine explained that the decision was made to develop the D’Urban Park site, “when it was determined that the traditional venue for the Independence celebrations (the National Park) would have required extensive repairs, as well as the appropriation of the Rugby field to accommodate the several thousand people  expected to participate.”

The project was authorised by Cabinet and works began in the last quarter of 2015. Minister Roopnaraine explained that in January 2016, he was asked by President David Granger to sit as a Director on the Board of the Homestretch Development Incorporated (HDI.)

“Although not my direct responsibility, the development team with no budget was given the task of preparing the site for the 50th Anniversary,” the Minister said. This meant relying on donations. “It was no small task. Works were conducted in the full view of the population…,” the Minister said.

Dr. Roopnaraine further explained that in April 2016, Colonel Larry London, the Chief Executive Officer of HDI, also a member of the NCC, informed the government that the donations and credit arrangements that it had been relying on to get the D’Urban Park Development Project underway had been exhausted.

“I anticipate that there will be a full and proper accounting from the Ministry of Public Infrastructure,” the Minister said.

Dr. Roopnaraine added that it is his understanding that many of the persons who had made contributions to the project, did not want to be publicly identified or thanked, “presumably for fear of condemnation or worst, from persons who were hostile to the project. It is also my understanding that none of the persons involved in the management and development works up to the point of the hand over to the Ministry, were remunerated,” the Minister explained.

The Opposition last month tabled a motion on the project in the National Assembly calling for answers on several aspects “in the interest of public accountability, transparency and good governance.”

During the debate on the motion the Government had maintained that its “hands are clean” and it has nothing to hide.