The Minister met with the miners in the presence of a  representative of mining company, Romanex Guyana to assuage mistrust that still lingers among miners.

Earlier this year, the Ministry of Natural Resources brokered an agreement, through mediation between the company and the miners from the Marudi  area who were in dispute over the use of mining claims which are held by Romanex in the Marudi Mountain.

Miners and businessmen and women who operate in the Marudi area sought assurance that the displacement of their shops will be properly addressed while others raised concerns about their lands being taken from them.

Shop owner Roslyn Primus noted that most of the shops in the area are operated by single parent women and asked that the Guyana Geology and Mines Commission (GGMC) authorise the move.

“We want to know where we are going…we want our licence,” Primus shared at the town hall style meeting held at the Arapaima Primary School.

As part of the agreement stemming from the mediation between miners and Romanex earlier this year, shop owners have to be relocated since their present location below the rocks of the mountain is dangerous.

Minister Trotman noted that “mining without shops is nothing”, and assured shop owners present that the GGMC is working out their relocation, and they will be moved “to a place you all agree on”. 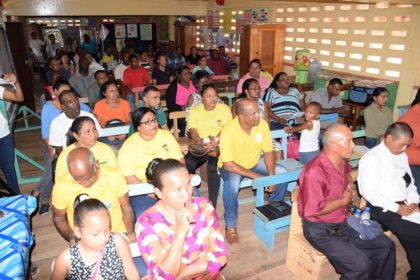 A section of the miners gathered for the meeting with Minister of Natural Resources, Raphael Trotman in Lethem, Region Nine

an honest living.” However, Minister Trotman pointed out that there are too many complaints in the South Rupununi area of illegal activities such as trafficking in persons in mining. The Minister said that there must be order in the mining sector, “Nobody is going to have their own way. We will have order.”

Premchand Paul of the South Rupununi Mining Association pointed out to the Minister that miners need to be shown “how the agreement could be fully implemented” if the distrust that remains between the Canadian company and small miners in the Marudi area is to be dispelled.

Meanwhile, Romanex Guyana has pledged to carry out several enhancement projects in Region Nine as part of fulfilling its social corporate responsibility. Marshall Mintz, company representative, assured miners that the company will hire locals and procure services locally in the setting of its offices and other works. “We won’t be bringing people from Georgetown unless absolutely necessary…as time goes on there will be jobs available both from Lethem and the deep South (Rupununi),” Mintz said.

As part of the mediation agreement, the Canadian company has agreed to ensure that communities nearest to its operations will be given priority hiring.

Romanex Guyana has also pledged to install internet services for 17 villages in South Rupununi, along with construction of roads among other initiatives.

Minister Trotman told the Government Information Agency (GINA) that, “the people keeping an eye” is one sure way along with monitoring by the GGMC to ensure that the company honours its pledges.”

Minister Trotman is expected to visit the community of Aishalton next month to meet with more miners from the outlying areas to address any concerns that they too may have.