Guyana is producing “good quality” stone despite complaints from some local quarries. This is the observation of Minister of Natural Resources Raphael Trotman who has responsibility for the sector. 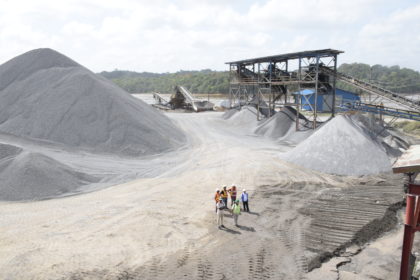 The machine that processes the stone

The Minister made the statement today, during a site visit of the St Mary’s Quarry located along the Essequibo River, Region Seven.  The visit was to assess the Toolsie Persaud Limited Company’s quarry operations.

“We’re happy because we see activity, we see industry at work, we see stones being moved, and this is what I believe the people of Guyana want to see,” Minister Trotman told the Government Information Agency   (GINA). 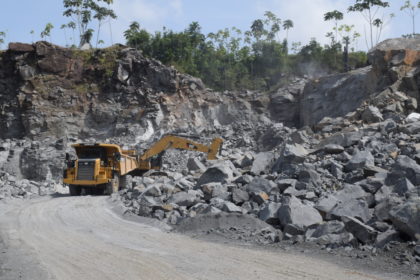 The Minister noted that there are several quarries at work and the industry “has been holding its own.”  The Minister added that quarrying is important to Guyana’s construction industry.

Meanwhile, the company received praise from the Guyana Geology and Mines Commission (GGMC) for improving health and safety at the quarry. “At least from what I’ve seen they would have taken action to improve in areas that were of concern for us, particularly personal safety,” Dianna McDonald, Acting Manager of the Mines Division, GGMC said. 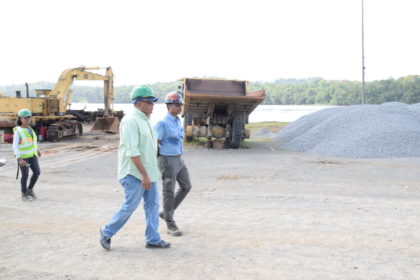 There have also been improvements in the environment around the housing of employees at the quarry, McDonald said.

Quarries submit a five- year mine plan to the GGMC which includes a yearly operational plan. Based on those projections, the GGMC monitors and inspects operations to ensure they are in compliance with the Mining Act and regulations.

The GGMC monitors and inspects the health and safety and actual mining practices at quarries. Inspections are carried out on a quarterly basis.

Toolise Persaud Limited has been operating the St Mary’s Quarry since 1956. The company mines gabbro rock. The high silica rock is suitable for sea defence works, construction and all concrete works, Rajesh Persaud, CEO/Director of the Quarries Division of the company told GINA. 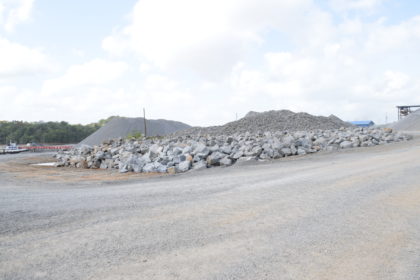 The various types of stones processed at the quarry

The St Mary’s quarry processes rocks that range from the base course, stones for concrete works, asphalt works and sea defence, Persaud explained.

The Toolsie Persaud accommodates 42 families in a community which was developed by the company at St Mary’s.