Georgetown, Guyana-Thursday, February 9, 2017- The Ministry of Communities held its senior staff meeting on Wednesday, the first of its kind organized under the highly effective, earned value management (EVM) approach.

Ministers of Communities, Ronald Bulkan and Valarie Adams-Patterson were present along with other staff from the Department of Housing, Guyana Water Inc. (GWI), the Community Infrastructure Improvement Program (CIIP) the Sanitation Management Unit (SMU) and the Local Government and Regional Development.

Minister Bulkan explained that the monthly meetings are for the purpose of reporting on the status of projects and their implementation.

He said it is also intended to guide the improvement of past performance and ensure the systems in place are designed to allow for efficient, timely execution of programs. 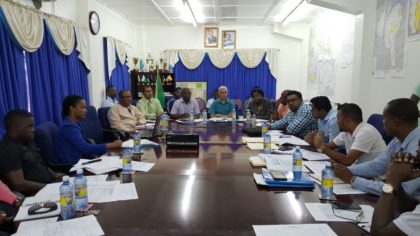 “This is the responsibility of project heads to achieve the targets set. What we hope to do is to have an interactive forum and to move away from the arms-length relationship which once obtained and existed,” the Communities Minister detailed.

A collaborative approach will now be taken to guide the implementation of projects which may cut across the various sectors.

Minister Bulkan also expressed hope that the new Chief Executive Officer (CEO) of the Central Housing and Planning Authority (CHPA) will be appointed in time for the implementation of the housing project.

He reported that after the resignation of former CEO Myrna Pitt, a name was submitted as her replacement but the suggested replacement is yet to reach Cabinet for approval since the matter has been engaging the attention of the executives.

However, the minister pointed out that the position requires an individual with strong, managerial capacity in order to effectively execute the 2017 work program.

“Hopefully, we should see the post being filled before the start of the project,” he said.

With regards to the shift in the housing policy from one of land distribution to constructing housing units, Minister Bulkan said there were many delays in securing the approval of the Board of Directors for the 2017 expenditure.

The board had requested information that largely would have informed their decision.

“I didn’t criticize the board when they announced that they wanted to have reliable data to confidently support the expenditure…We will now move in a different direction. We have different priorities, a different emphasis and a different focus,” Minister Bulkan emphasized.

The Ministry will now move in the direction of a new housing policy where living units will be constructed by private contractors.

Over the last few years, the previous government invested $13B to develop 38 housing schemes.

However, the overly ambitious program resulted in an abysmal rate of occupancy, the scarcity of land and thousands of disenfranchised applicants.

“We were fooling ourselves that we were making housing available but we were in effect sharing out lands. I have held discussions with the management team and since then we have examined the weaknesses of the land distribution system.”

The Communities Minister explained that there was a lack of traction in the progress of the program due to health issues experienced by the Chairman of the Board, Hamilton Green.

However, management will identify actions needed to overcome any constraints and work towards ensuring the timely execution of project.