Ministry of Natural Resources looking for land for Marudi miners

Minister of Natural Resources Raphael Trotman has committed to looking for mining lands for miners in Marudi as part of efforts to bring resolution over the long-standing dispute between South Rupununi miners and Romanex Guyana Incorporated.

Minister Trotman was in Lethem, Region Nine, on Wednesday to make a presentation at the Regional Toshaos Conference as part of his ministry’s outreach for the year.   Later that day, the Minister held a public meeting with residents.

The on-going dispute at the Marudi Mountain was the primary concern raised at that public meeting.  The Minister assured the residents that steps are being taken to accommodate miners. 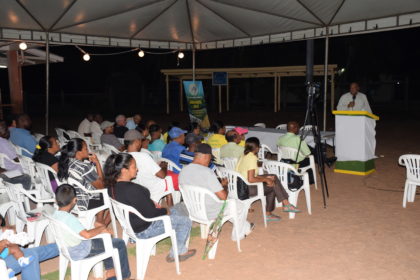 “What government is working on right now is identifying another portion of land with value for you so that we are not just going to tell you to move from here to go over there. We want to ensure that we’ve done some prospecting, that we have surveyed it, that it has gold or good prospects,” Minister Trotman told residents.

He cautioned residents that this will take some time since the Ministry will have to ensure that the land is outside of Romanex’s concessions and does not encroach on land titling extension requests of indigenous communities.

Last April, the Ministry of Natural Resources brokered a mediation agreement among, Romanex, miners and indigenous communities to resolve mining disputes in Marudi.

However, there have been allegations levelled back and forth between the signatories over violation of that agreement. One clause of the agreement is the relocation of the “landing” in Marudi to facilitate an Environmental and Social Impact Assessment (ESIA). 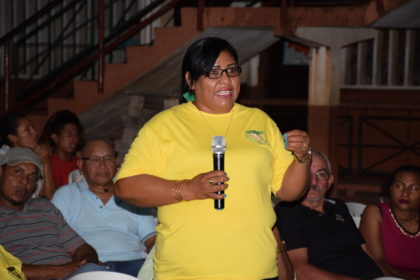 Shop owners are contending that the area identified for their relocation does not have basic amenities.

Joslyn Primus, a female miner, pointed out that there is no potable water at the new landing. Primus further noted that the allotment of the new landing is small and does not make provision for toilet facilities.

Addressing these concerns Trotman said, “I will not ask anyone to be moved to a location that is insanitary, that is not prepared.”

Minister Trotman said he is confident that the dispute will soon be resolved. “All the sides in this process in Marudi Mountain accept that something has to change; it’s just a matter of how; so I’m confident that we will have a resolution and I’m seeing the light at the end of the tunnel,” the Minister said.