Ministry of Presidency get more than $2B for current spending

The Committee of Supplies of the National Assembly today approved $2,112,351,000 for the Ministry of Presidency’s 2019 current spending in the areas of Policy Development and Administration.

This is according to Minister of State Joseph Harmon who was responding to the opposition’s questioning of the sum of $24,063,000 as it relates to remuneration for President David Granger. 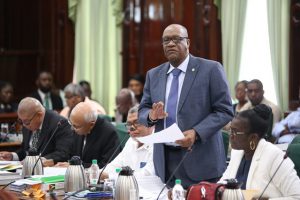 Further, the Minister of State said there is a variance of a minus 14 percent in employment costs for contracted workers given that staff has been moved around within the Ministry of the Presidency.

Asked about the employment details for four additional staffers, by Opposition member Juan Edghill, Minister Harmon said, “There is no increase since there is a reduction the figures will show rather than 217 there are 202 because 15 of these staff have actually moved from here to Department of the Environment.”

MP Edghill also sought information relating to the number and age of contracted employees, and whether the Ministry of Presidency was in compliance with the Public Service Commission’s rules governing such employment. “We are in compliance and there is no requirement for age… the employees provide a particular skill we are looking for and therefore that requirement of being under the age of 45 is not applicable…” Minister Harmon said.

In addition, the Minister of State, responding to MP Anil Nandlall’s question on the allocation of $29,300,000 for the Maintenance of other infrastructure at the Ministry, said the sum represents continued spending to upgrade the Presidential complex.

“This is not a new project. This is work that will make the presidential complex better secured and prevent the effects of flooding. In 2015 we encountered flooding which caused the loss of documents on the bottom floor because the revetment was poor…. We are ensuring the presidential complex looks presidential. This project also covers Castellani House and BIDFORD, now the Stephen Campbell House which accommodates the Ministry of Citizenship….” Minister Harmon explained.

Among the works identified by the Minister of State is the construction of a concrete fence around the Presidential Complex. This Minister Harmon assured was in keeping with the regulations of the National Procurement and Tender Administration Board.