–More scholarships for girls in STEM

Teachers will continue to be a vital resource that the Coalition administration invests tremendous resources in.

To this end, the administration intends to increases the duty-free concessions for teachers following the March 2 elections, Minister of Public Service Hon. Tabitha Sarabo-Halley has assured.

Minister of Public Service Hon. Tabitha Sarabo-Halley makes a point during her address at the women’s rally. 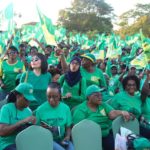 Some of the attendees at the Coalition’s women’s rally at Parade Ground, Georgetown.

Speaking to the hundreds of women assembled at the Parade Ground on Thursday for the women’s rally hosted by the coalition Minister Sarabo-Halley noted: “We are a vital part in what happens on March 2.”

With eleven female government Ministers in the National Assembly representing the APNU+AFC coalition, Guyana has achieved twice the global average of representation for women in government, she noted.

Commending the greater level of inclusivity and balance found under the leadership of His Excellency President David Granger, the minister further outlined several provisions for youth, women and girls enshrined in the coalition’s manifesto popularly referred to as “a contract with the people”.

Among the initiatives highlighted were the development of innovations for youth, STEM scholarships for women and girls and the continued promotion of gender equality. Also, among the coalition’s plans is teacher training and the establishment of Cyril Potter College of Education campuses countrywide.

Minister Tabitha Sarabo-Halley was among a lineup of several women addressing attendees at the rally held on Thursday as part of the APNU+AFC campaign activities countywide.

General and Regional Elections are slated to be held on March 2.