The motion tabled by Opposition Chief Whip, Gail Teixeira that called for the 89 recommendations of the Commission of Inquiry (COI) into the Public Service to be examined by a Special Select Committee was outvoted in the National Assembly last evening.

The Opposition Chief Whip pointed to moves by the Government to transfer previous contracted workers to a pension scheme. This was one of the trends; the MP said that is discouraging those youths in particular who are qualified and already employed. Many youths, she explained, did not see themselves staying in a job for 20 or 30 years; hence this idea needed a “rethink”. 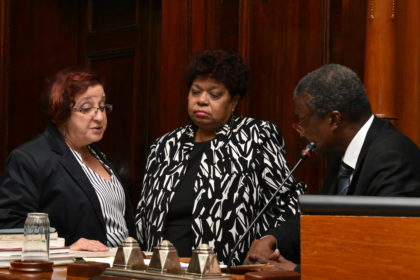 From left to right: Opposition’s and Government’s Chief Whips, Gail Teixeira and Amna Ally, respectively listen keenly as Speaker of the National Assembly, Barton Scotland makes a point to them

MP Teixeira quoted a letter, by a concerned employee, which outlines changes being implemented by some agencies such as no sick-leave, a one -year probation instead of the usual three or six months, and the increase in the age of retirement from 60 to 65 years. These were just some of the key issues that require more consultation from the society at large, Teixeira stated.

The Opposition MP also spoke of extended wage agreements, amended allowances, and the creation of a wages and salaries commission. The closure and merging of several sugar estates were also called into question since these were not mentioned in the PSC inquiry. The fact that some 58% of the population comprised youths below the age of 60 indicate a need for wider and more comprehensive consultations, Teixeira pointed out. She further called for the 89 recommendations of the Commission of Inquiry into PSC to be taken seriously by Government adding, “We would like to know what the Government’s take on it is.”

Minister of Social Protection, Volda Lawrence spoke of training and development and the proposed change in the retirement age as mentioned in the report. She also took the time to congratulate Professor Harold Lutchman who oversaw the production of the PSC’s Inquiry. She noted that the report, “felt “that 55 is too early an age for public servants to retire. She added, “The general consensus pointed to a retirement age of 65 with the option of retiring at 60.” 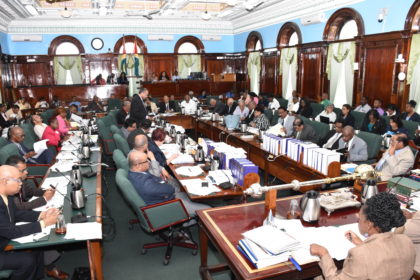 The National Assembly in session on Monday

The Minister cited the average 65-year retirement age which is prevalent across the Caribbean. This higher age would also benefit the coffers of the National Insurance Scheme, she further explained.

Touching of training and development, Minister Lawrence stated that institutions such as the Critchlow Labour College, Public Service Training College and the University of Guyana must be sensitised to maximise the quality of their output.

Opposition MP, Ganga Persaud, took the floor to make his case for the recommendations be taken to a Special Select Committee for examination. He noted that 187 interviews were conducted during the preparations of the report, but only 45 of those were actual working public servants. He also noted that some recommendations are already being acted upon such as recruitment for the Public Service Training College. He called for more “public discourse” to prevent an unhelpful working environment adding, “I think we need more time to look at this.”

Following Persaud was Opposition MP, Africo Selman. She described the iquiry as one that was timely and important.

Contributions were also made by Minister with responsibility for Labour, Keith Scott who said he supported the inquiry as it was composed, and that he saw no need for it to be taken to a Special Select Committee for further deliberations.

Minister of State, Joseph Harmon took the floor next and thanked the Commissioners, Professor Harold Lutchman, Consultants Sandra Jones and Samuel Goolsarran, and Secretary, former Magistrate, Geeta Chandan-Edwards for the outstanding work that they did.

He noted that given the nature and work put into the report, copies were ordered by President David Granger, to be given to the Political Opposition and Trade Unions for their perusal. He bemoaned the retaining of numerous contract workers by the previous Government and the subsequent negated role of Trade Unions. The Minister of State noted that the National Budget was due to be presented and hence the recommendations made must be considered, “in keeping with financial considerations and fiscal constraints.”

The issue of whether the matter would be moved to a Special Select Committee was then put to a vote and the Government side outvoted the Opposition’s proposal. The Parliament was then adjourned until November 28, 2016 when the 2017 national budget will be presented by Finance Minister, Winston Jordan.