A number of cash crops are being eyed for production through the hydroponics method of farming based. The National Agricultural Research and Extension Institute (NAREI), has received the support of the Organisation of American State’s, Development Cooperation Fund (DCF) in this regard. 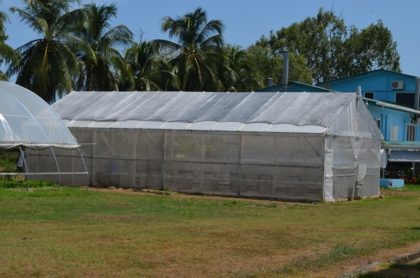 The hydroponic farming method has been proven to be the most cost-effective over the traditional agricultural methods for planting cash crops such as (hot) pepper, sweet pepper, tomato, cucumber, lettuce and cabbage.

NAREI’s Hydroponics Research Assistant, Jonathan Melville told the Government Information Agency (GINA) that with hydroponics becoming one of the most cost- effective means of planting cash crops, local farmers can expect this system to be implemented on a larger scale.

“We want to promote the use of hydroponics on a wider scale so it’s not just for research, but also for implementation so that the common person can say ‘yes, this is something that looks not just interesting but it actually sounds like a bring money into my operations’ thing,” Melville explained.

Trials of planting tomato and sweet pepper via the hydroponic method have shown good results and have prompted an expansion of the project to include green and leafy vegetables at NAREI.

Melville said, “Not every crop is suitable for hydroponics, but currently we are focusing on fruit type vegetable crops like sweet pepper and

tomato. We are also doing some trials now on lettuce and other leaf type crops so we’re looking to see if that can be extended to leaf type vegetables like pak choi (and) lettuce as well.”

In comparison to traditional agriculture, hydroponics is less costly because it is a liquid medium of planting crops. This eventually decreases the chance of loss of crop and investment. In addition to high economic returns promised there are a number of other benefits attached to adopting hydroponics farming.

The Research Assistant explained that, “ The main talk these days is about climate change, and recently there was a statement that went out from the Food and Agriculture Organisation (FAO) (which stated) food should change, as well, because climate is changing so it is something that we can use in the near term future. It’s not something for the long-term; it’s something we should use now.”

Melville said it also speaks about economics because larger scale production can be had, and it will be less labour intensive because there won’t be any need to weed.

In Guyana, the use of the recycling method of hydroponics is utilised. This method referred to as a Nutrient Film Technique or NFT is implemented at NAREI. This is just one type of hydroponic gardening. This method involves the continuous flow of nutrient solutions through a system which is powered by a submerged pump. It is housed in a 50ft by 24ft wooden structure, with concrete filled base. A shade net is placed around the structure to deter the presence of insect pests.

Hydroponics is therefore recognised as an established branch of agronomy. It results in higher crop yields and this method can be utilised to provide a regular supply of fresh vegetables even in areas where traditional gardening is impossible.