A pattern of falsifying statistics, by the Opposition, was noted by the Finance Minister Winston Jordan. During his defence of $300.7 Billion 2019 Budget before the National Assembly, the Minister described some of the claims made by the other side of the House as astonishing. He recalled the Opposition’s claim about the cost of food products increasing by some six percent when in reality it was just over two percent. 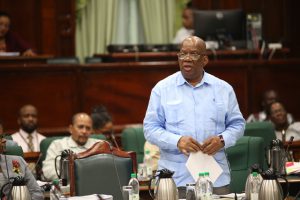 Another claim by Opposition MP Vickram Bharrat about $100Million allocated versus the actual $5Million budgeted for the memorial in Linden to honour those killed during a protest by residents, under the PPP administration, was also noted. This the Minister stated was a clear pattern of the Opposition trying to mislead the House and people.

The minister recalled the decline of Public Debt, cited in official documents $329Million in 2014 to 344Million in 2017. This was a stark contrast, the minister pointed out.

Yet another claim about 200 taxes being increased was also false, the minister pointed out. He quoted the decrease of the corporate tax rate to 25 percent as observed by Private Sector official and Banks DIH executive Ramesh Dookhoo. Dookhoo, in an interview, with the Department of Public Information, exclaimed that he never believed that under this government that such a wide range of tax exemptions and tax relief would have been possible. The veteran business personality said this proves that Budget 2019 is a private sector-friendly budget.

Referring to the actions of Republic Bank and Baroda, Minister Jordan said their actions came as no surprise. Baroda signalled its intentions since April, he explained and reflected what was occurring worldwide, “It is not that business is not profitable, it is just that they don’t think it is profitable enough.” He listed several countries where banks are withdrawing from, stating that we need to see opportunity in these challenges, “With five billion barrels of oil, whose pulling out?!”

The after-tax profits recorded by the three major banks were clear indications that the economy is not about gloom and doom as painted by the Opposition, the minister said, “We have to be careful of what we are letting into the Hansard because ulterior motives are afoot.”