─ 50 days of prayers to mark years as a Republic

Respect for religion has been highlighted as a force for unity at a National Day of Prayer held as part of observances to mark Guyana’s 50th anniversary as a republic.

The Department of Social Cohesion hosted Tuesday’s interfaith service under the theme “Enhancing the Culture of Prayers; Promoting Religious Harmony. 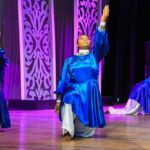 Members of the Royalty Dance Ministries during their performance. 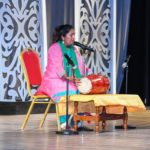 A representative from the Guyana Sanatan Dharma Maha Saba perform a bhajan. 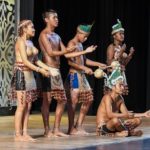 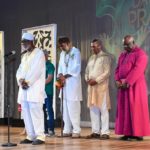 Hala Bassier offers a prayer at the National Day of Prayer event. 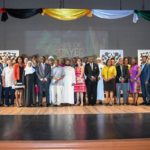 Members of the various religious denominations, government officials, and members of the diplomatic corps who attended the National Day of Prayer.

“We intend that this activity and similar ones will lend to create an awareness of how respect for religion can unify us rather than divide us,” said acting programme coordinator Natasha Singh-Lewis.

There was also a Blessing Dance by an Indigenous troupe from St. Cuthbert`s Mission and another dance by the Royalty Dance Ministries, along with bhajan singing from the Guyana Sanatan Dharma Maha Saba.

The event also featured poems, songs, presentations and chants by persons from the different religious groups

Attendees included government officials, members of the diplomatic corps, and students from the Guyana Youth Corps and several secondary schools in the city.

The Department of   Social   Cohesion launched   ‘Fifty   Days of   Prayer’   on January   5,   to encourage discussion on various topics in homes and workplaces. Each day a theme for discussion is suggested on the department’s Guyana Republic Jubilee Facebook page.