Georgetown, Guyana – (September 22, 2017) The Ministry of Social Cohesion, in collaboration with the National Sports Commission (NSC), today, launched the National ‘Skip to my Lou’ (Jump Rope) Competition at the Ministry of Culture, Main Street, Georgetown. Speaking at the launch, Minister of Social Cohesion, with responsibility for Culture, Youth and Sport, Dr. George Norton said that the Ministry is pleased to be associated with this activity which seeks to foster social cohesion among students.

“There is no doubt about the fact; this competition has numerous benefits, one of which is the fostering of Social Cohesion. Participants will be able to develop better interpersonal skills through interactions with others from various educational districts. At the same time, the competition will allow for the students to engage in team-building,” Minister Norton said.

Minister Norton said that upon its completion, this competition will help to foster a greater sense of cohesion among participants and it will also aid in them understanding the benefits of exercise and a healthy lifestyle. “Skipping also serves as a perfect means of a healthy lifestyle practice and more specifically, can be utilised as a catalyst towards the reduction of the high number of non-communicable disease affecting our society.”

The championship has received the support of corporate and non-corporate stakeholders namely Banks DIH and the Ministry of Public Telecommunications whose representatives were also present at the launch.

The General Manger of the National Data Management Authority, Mr. Francis Simmons who represented the Ministry of Public Telecommunications, told the gathering that the ministry is honoured to be a part of this novel event and informed that the Ministry will be awarding the winners of the competition with laptops.

“I am very happy to see physical activities being planned and executed for our children at a national level even as we push internet access and Information Technology in our schools, we always need to strike that balance and proportion among physical activity, school work and time behind electronic devices.” Mr. Simmons said.

He also noted that children’s current and future health, both mental and physical, depends on the balance of sports and academia and expressed the hope that more activities such as this are planned and executed in the future.

The “Skip to My Lou” initiative started in Linden, which is the hometown of the competition’s organiser, Mr. Shavane Green. Initially, only primary schools were invited to participate. However, upon seeing the benefits of this competition to children, Mr. Green pushed for it to become a country wide competition and was able successfully to do so with the help of Director of Sports, Mr. Christopher Jones.

Banks DIH, Brand Manager for Coca Cola, Mr. Troy Peters shared his excitement to be partnering with the Government for this event as the country observes Education Month.

“This initiative has taken off in a very big way worldwide and being the local bottlers of Coca Cola, we realise that the “Skip to my Lou” programme provides a platform for young people in Guyana to be actively involved in activities. Whether you are riding, swimming, running or skipping, young people will see the positive outcome of such activities” Mr. Peters said.

The championship which is scheduled for September 28, 2017 at the Cliff Anderson Sports Hall from 10:00hrs will target 100 schools, both Primary and Secondary, from eight educational districts across the country. Each school team will comprise five jumpers. The competition will take the format of individual freestyle, individual single rope/double Dutch teams and last man standing.

Minister of Social Cohesion with the responsibility of Culture Youth and Sport, Dr. George Norton delivering his remarks at the “Skip to my Lou” launch today. 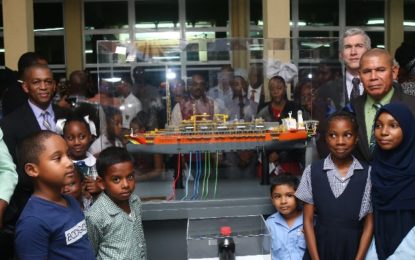 Joint Statement from the Ministry of Education...

“Silly season no excuse for allegations” –...

From stage to screen

Bigger roles for regions during decade of...