Reports on the ground show that there is flooding in the Region Five indigenous community of Moraikobai. A team comprising officials from the Civil Defence Commission, the Regional Chairman of Region Five and other senior regional officials was in the community to assess the situation. 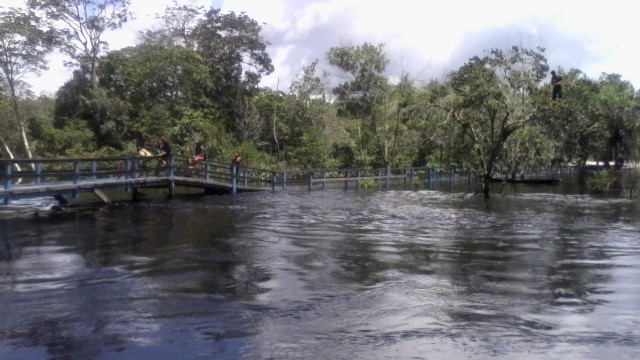 The main access bride at Moraikobai partly under water. The high section is about 23 feet above the river bed.

Reports are that there is severe flooding in some parts of the community, affecting mostly farmlands and crops.

The water level in the Mahaicony River, through which the community is accessed and more so in the Francois River, is extremely high.

The lower Moraikobai is the area most affected. The effect of the flood is evident in this section of the community with farmlands under water and in those areas where the land is not flooded the soil is heavily waterlogged.

However, this was not the case for Central Moraikobai which is located on a hilltop.

The rising water levels, has resulted in foot and vehicular trails becoming inundated and impassable. This has created severe challenges for persons, especially children who use the trails to traverse to and from school as well as farmers and loggers who use these trails to access their farmlands and logging areas.

The trails are reportedly impassable even with the use of tractors, motorcycles and ATVs since in some areas the water level exceeds five feet.

It is reported that approximately 160 families along with the farming and logging areas are affected by the flooding in Moraikobai. 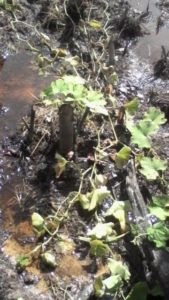 The Hydrometeorological Department has projected continued rains over the next few days. Based on this projection it is likely that the residents may suffer prolonged flooding.

However, recommendations have been made to the relevant agencies for the community to receive assistance especially for potable water to be supplied. Officials are monitoring the situation and attention will be paid to public health and food security issues.

Photographs taken yesterday during an aerial reconnaissance failed to capture the situation on the ground.

GINA will continue to provide information on the situation in Moraikobai.