Oil and gas revenue could transform Guyana –US Ambassador

The United States Ambassador to Guyana, Perry Holloway, believes the revenues that are likely to come from the oil industry can transform the country to “one of the richest” in the western hemisphere. 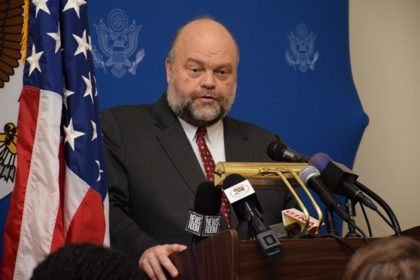 “Examples of how the revenue could be spent include but are not limited to investing in hydropower and/or other forms of renewable energy, modernisation of health care facilities… better schools and universities, and infrastructure projects like a deep-water port and the road to Lethem,” Ambassador Perry Holloway said at a recent presentation of financial assistance to Guyana’s Extractive Industries Transparency Initiative (EITI) candidacy at the United States Embassy.

Ambassador Holloway cautioned that thoughtful planning by key stakeholders is needed to make this possible. “The government, in consultation with other key stakeholders will be able to decide in what sectors and projects the revenues are to be invested,” he explained.

Oil revenues could be used to develop hydro power which in turn would drive local manufacturing. While oil production would not create many jobs within the industry itself, the possibilities for job creation in other sectors are significant. Guyana’s oil production will be done off shore and initial plans do not include refining the product.

Minister of Natural Resources, Raphael Trotman, is optimistic when it comes to the potential of Guyana’s oil and gas industry. “Our government looks at this expected revenue as being explosively transformative for the economic and social development of all Guyanese,” he had previously indicated.

Minister Trotman pointed out that having an accountable and transparent sector also creates an improved investment climate. “(It is) a signal to international investors that the government has a clear commitment to transparency and good governance and strengthening accountability vis a vis the Guyanese people,” Trotman said.

To realise this potential, the government has been pursuing membership to the EITI to have an accountable and transparent extractive industry. The United States has provided financial assistance to Guyana to realise this membership.

Ambassador Holloway said this assistance, a grant through The Carter Centre, is part of putting infrastructure in place to facilitate the expected revenue from the emerging oil and gas sector.