The sum of $908Million was on Monday approved as the budgetary allocation for the Prime Minister’s Secretariat. 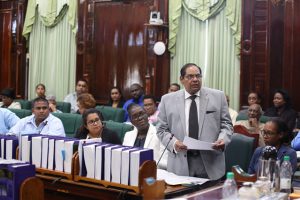 Day one of the consideration of budget estimates saw the current and capital expenditure for the Secretariat being scrutinised before it was unanimously approved.

Responding to a question posed by Opposition Member of Parliament Anil Nandlall concerning an allocation of $80 Million under current expenses, Prime Minister Moses Nagamootoo stated that the funds will be used to conduct various projects planned as well as pay for miscellaneous items.

The Prime Minister told the National Assembly the sum of $3,080,000 will be used to fund the email domain for the Prime Minister’s Secretariat as well as host and maintain the Secretariat’s website which will be launched in 2019.

New and ongoing training programmes for radio broadcasters are also budgeted in the Secretariat’s funds.

The allocation caters for Prime Ministerial outreaches across Guyana and amounts to $5 Million.

There were also allocations for school tours, work-study students’ stipends and other miscellaneous items.