“Order No. 60 unlawful; no declaration cannot be made on this basis” – S.C Boston argues

─ says his client acted within the law

Senior Counsel Neil Boston said that Order No. 60 of 2020 must be deemed unlawful making the results emerging from the national recount invalid and therefore, the Guyana Elections Commission (GECOM) cannot move ahead with a declaration based on those figures. 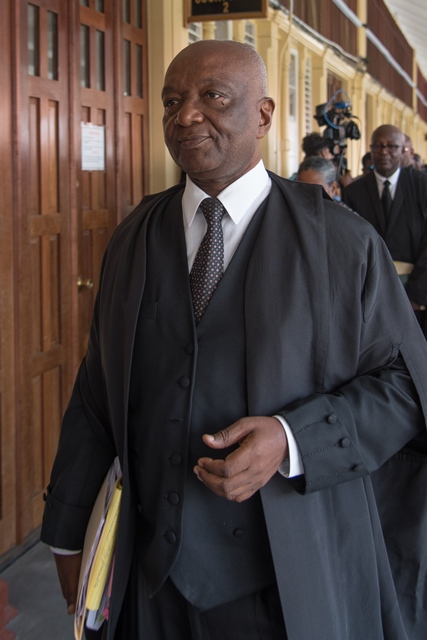 Lowenfield through his lawyer said the valid votes recorded on the Certificates of Recount are not the same as determined by the Presiding Officers on March 2, 2020, due to numerous directives issued during the supervised National Recount.

Boston reminded that Order No. 60 of 2020 came in existence as a result of grievances by the various political parties and was gazetted on May 4, 2020, following an agreement by both President David Granger and Opposition Leader Bharrat Jagdeo.

It was argued that the method used during the national recount was inconsistent with the Representation of the People’s Act and the official manual for Presiding Officers (POs) and other Polling Day officials.

The court was provided with several examples to show the Elections Commission, during the National Recount, validated votes in contradiction with the Representation of the People Act.

“The Commission’s instructions changed from one day to the next depending on the questions that arose during the recount. Further, there was no strict adherence to the procedure for determining valid votes as described in Section 84 (6) of the Representation of the People Act Cap.1:03,” the affidavit stated.

The Senior Counsel maintained that Order No. 60 has given GECOM unlawful power to resolve election disputes. Such matters, he said, should only be resolved in an election court which has the exclusive jurisdiction according to Article 163.

Article 162, Boston said, cannot give GECOM the right to resolve any issue that arises in relation to whether unlawful acts affect the results.

“And that issue was not canvassed before Justice Barnes, so this Court has jurisdiction to deal with that matter,” he stated.

He also submitted that since Order 60 is subsidiary legislation it cannot be inconsistent with any legislation.

On July 9, the GECOM Chair (ret’d) Justice Claudette Singh had given the CEO a 2 pm deadline to submit his final report on July 10 using valid votes emerging from the 33-day national recount as indicated on the Certificate of Recount.

Cognisant of the impact the CCJ’s ruling might have had on the report after its decision invalidated Guyana’s Court of Appeal June 22 decision, the CEO on July 10, wrote Justice Singh seeking further guidance and clarifications.

The Chair again in writing directed that the CEO use Section 96 of the Representation of the People Act Cap. 1.03, as the basis, to submit his final report.

Acting in accordance with the Constitution, CEO Lowenfield submitted his final report on July 11, showing a win for the APNU+AFC Coalition. This report was not accepted by the Chair.

Boston argued that his client’s report tendered is consistent with Section 96 of the Representation of the People Act.