Over 100 American companies express interest in investing in Guyana

Over 100 American companies are eagerly awaiting approval to invest in Guyana. These companies have already expressed their interest are awaiting the go-ahead from various regulatory bodies.

Speaking at the official opening of the international company, First Bauxite LLC and its local subsidiary Guyana Industrial Mineral Incorporated (GINMIN), Political and Economic Counsellor at the United States Embassy in Georgetown, Alexandra King-Pile, said the United States noted with great interest Guyana’s pronouncement that it was open for business.

“We know Guyana is open for business and the United States plans to take you up on it,” King-Pile stated. 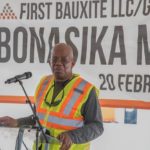 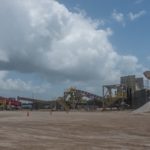 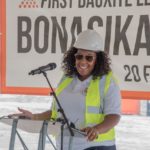 Political and Economic Counsellor at the United Stated Embassy in Georgetown, Alexandra King-Pile.

Adding that one of the highest priorities of the US Mission is to promote responsible economic growth by expanding and deepening commercial partnership. Hence, the United States is in support of the Government of Guyana in creating an environment where business, including international investment, can thrive.

“I can assure you that the number is staggering, we have over 100 inquiries pending right now for US companies, various sizes, across various sectors who say “we want to get into Guyana,” King-Pile announced.

Speaking to DPI, the US Political and Economic Counsellor, disclosed that expressions of interest were shown in construction, logistics, food service, hospitality and transportation among others.

She said Commercial Diplomacy remained an important aspect of the work at the embassy. And that its focus on providing technical assistance to grow rapidly, improving institutions, remained, not only to increase prosperity but also to ensure that all Guyanese benefit as well.

Earlier in the week, at a sod-turning exercise at the proposed site for the construction of Guyana’s first Hilton Hotel Minister of Finance Hon. Winston Jordan noted that the government has created a regime attractive enough to both local and foreign investors which resulted in continuous investments.

The Minister assured that the administration will continue to create an environment that ensures businesses make profits, establish regulations to protect the environment and workers, and grow the economy.

Oil giant, ExxonMobil, one of the world’s largest publicly traded energy providers and chemical manufacturers has invested approximately $37.5 Billion (US $180M) into Guyana

Even the country’s commercial airlines have more competition with American Airlines, one of the largest airlines in the world, starting its non-stop flight from New York to Georgetown last December.

In the meantime, Guyana’s economy has been projected to grow by 86 percent this year according to the IMF.