Parents, teachers and operators of private schools have their say on VAT on private tuition-Gov’t commits to reviewing measure

Students, parents, teachers and operators of private schools got their chance to have their say about the 14 percent Value Added Tax (VAT) on private tuition, as the government begins a process of carefully reviewing  this  and other 2017 taxation measures in preparation for  the 2018 Budget. 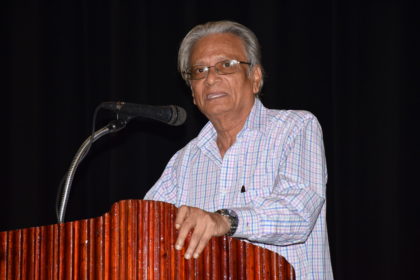 Minister of Education Dr. Rupert Roopnaraine addressing the students, parents and operators of private schools at the meeting

At a meeting held today, at the National Cultural Centre (NCC) stakeholders decried the taxation measure in , frank and open discussions with Prime Minister Moses Nagamootoo and Minister of Education Dr. Rupert Roopnaraine. The, more than three hour, meeting was chaired by Minister of Telecommunication Cathy Hughes.

During the meeting calls were made for the Ministry of Education and the Guyana Revenue Authority (GRA) to go after schools which are delinquent in paying their taxes. “The solution is not to punish the schools that are already paying taxes (and are tax compliant). It is to go after those who do not,” one operator suggested.

The government officials were also urged to ensure that only authorised schools were permitted to operate. Questions were also asked about the ability of the public schools to provide enough space for students in private institutions. The inability of some private school parents to stand the additional cost of an hike in tuition as a result of the VAT, would contribute to the aforementioned, one parent pointed out.

Prime Minister Nagamootoo, in his response, assured however that this was not the case. “We should not think that public education is superior to private education. One is a supplementary to the other,” the Prime Minister said.

He also assured them that they had a legitimate right as citizens to make your voices heard on VAT on private educational institutions. He 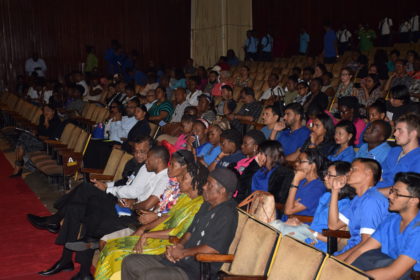 Students, parents and operators of private schools at the meeting at the National Cultural Centre

explained that taxation measure is one that is accepted and adopted by Cabinet. It was cabinet that also took the decision to review the implementation of the measure in light of the public outcry including the several protests and the petition that attracted over 15,000 signatures, the Prime Minister explained.

Importantly, the Prime Minister (PM) committed to taking all the concerns and views expressed to Cabinet on Tuesday for consideration.

“The decision of the VAT on private educational institutions is not a popular one and a good government must always reevaluate its decision,” the PM said. “You have had your say…we have heard all your arguments…and we will take them to Cabinet and start an open-minded review of this measure,” he said.

He further explained that following the public outcry that the government will be reviewing this and all other taxation measures implemented this year, towards reaching solutions that would benefit both the people and the administration. The Prime Minister however advised that a decision on these would not be forthcoming this year.

During the meeting Minister Roopnaraine had reaffirmed the government’s commitment to education, and fixing the problems in the system. The Education Minister had also noted the need for the ministry to move quickly with regards to registering all private schools. He had also expressed the view that the private schools can absorb the VAT without passing it on to the students.

He explained that of the private schools that are operating in Guyana, only 57 percent are currently registered by the GRA, and of this total only 20 percent were recognised by the Ministry of Education, 80 percent were not. 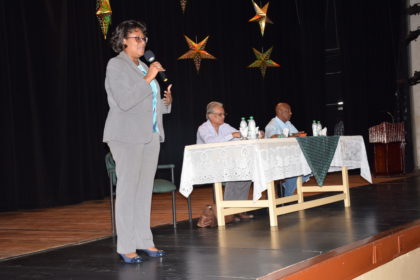 He noted that in spite of these statistics, both categories of registrants provide educational services at competitive prices and that tuition fee remains a matter of $300,000 or $400,000 depending on educational levels.  “In many cases it has been determined that the fees charged to the school exceeds those being charged by University of Guyana,” the Minister said. He further noted that the total tuition charged by the top eight of these institutions exceed $3B annually and that these fees do not include frees charged by other services such as extra lessons.

Further the minister noted that there is a high level of non-compliance in timely income, property and corporation tax returns and the payment of taxes. “Teachers are in many instances treated at contract employees and employers are not deducting the appropriate PAYE and NIS,” the minister said.

Prior to the 2017 Budget, educational services enjoyed zero rated services which enabled the institution registered for VAT being refunded over $150M in VAT, the minister said. He noted that these taxes were already being charged to the users of these facilities.  In light of these educational items now being exempted, the education minister expressed hope that these items would now be purchased at a lesser cost, and the gains be passed down to the students.