Minister of Social Cohesion, George Norton today, received a 150 horsepower Yamaha outboard engine from the Ramada Georgetown Princess Hotel, at a presentation ceremony at the hotel on the East Bank Demerara. 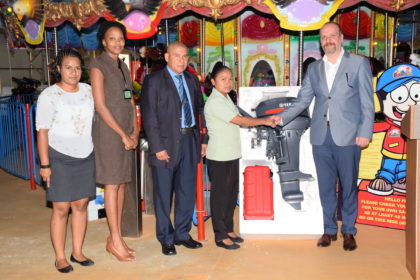 The engine will help with the everyday health care work for the community of Phillipai, Region Seven, and surrounding villages. “It will help particularly in the immunisation process, since a lot of satellite villages are around the community, and they depend mainly on them for health care,” Dr. Norton pointed out.

Minister Norton expressed government’s gratitude for the gesture, stating that, “We are happy to be able to carry out the vision of our ministry. We know that Guyana has strengthened its diversity of our society, particularly from the point of view of our geographical locations, our economic status, our ethnic differences and our cultural differences.”

Minister Norton noted that most times persons take the medical personnel for granted without understanding the conditions they work under. “I must commend the health care workers of this country, who, over the years work under very limited and restricted conditions of work and have been doing 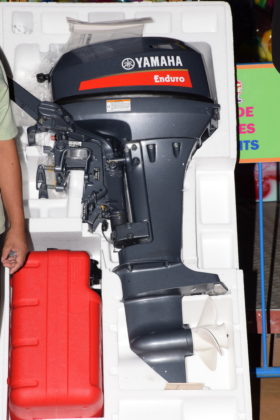 their best,” he added.

Claudette George, a resident of Phillipai and a nurse by profession, received the engine on behalf of the village. George said that the engine will be used to transport health workers around Phillipai, and riverine villages.

“This will aid in the more effective implementation of the vaccination programme in particular. The people of Phillipai are grateful for the kind gesture, and express thanks to the management and staff of Princess Hotel,” Nurse George said.

Mustafa Eray Kanmaz, Casino General Manager, noted that Princess Hotel has been playing its role in its social responsibility to the country and the people at large. He noted that the hotel has been supporting programmes such as school tour initiatives, the back to school programmes by which children receive school supplies and the President’s Five Bs initiative.

Kanmaz explained that the outboard engine will transport healthcare workers from the indigenous communities in Region Seven, and they are pleased to support and will continue to support the Ministry and the country’s development.