The Ministerial Task Force on Trafficking in Persons of the Ministry of Public Security today held a training course for Police Prosecutors of the Guyana Police Force (GPF) to be equipped the prosecutors with the necessary skills to successfully present a trafficking in person case in court. The training will also enable them toa use evidence effectively to prove perpetrators guilty. These persecutions are in line with the combating of Trafficking in Persons ACT NO 2 of 2005, while taking international best practices into consideration. The training course was held at the Guyana Police Force Officers’ Training Centre.

The Prosecutors received training in identification, prevention and prosecution as it relates to TIP. They also highlighted some of the challenges they faced when prosecuting a TIP Case and shared several success stories.

Task Force Coordinator (ag), Oilver Profit from the Ministry of Public Security said that the Task Force is aware of the challenges that the Prosecutors faced when building and prosecuting TIP cases. However, he noted that these challenges can be solved with team work among the different agencies. Profitt said that Task Force will also be assessing the needs of Police Prosecutors with regard to similar cases locally. 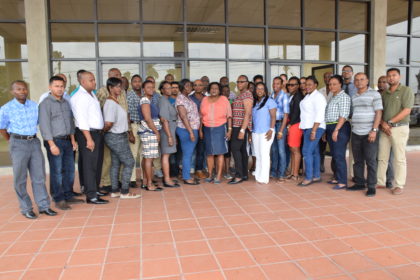 Additionally, the Task Force will be creating a network with Prosecutors whereby the can review successes, failures and make recommendations to improve future TIP cases.

Presentations to the Prosecutors highlighted definition, the act and means of trafficking in persons. Additionally, Profitt outlined the four key areas that the task force is functioning by. These include Prevention, Protection, Prosecution and Partnerships.

Senior Officer (SO) in charge of the Trafficking in Persons Unit of the Major Crimes Unit, Criminal Investigations Department, Shenay Castello in her presentation of “The Role of the Guyana Police Force in TIP” said that the most important role is to “prevent the crime from happening.” She added, “It’s the duty of law enforcement officers and other stakeholders to stand committed in fighting TIP.”  Castello elaborated that the law enforcement officers are tasked to bring justice to the victims of TIP.

The SO emphasised that the fight against TIP cannot be done by just one agency but partnerships need to be formed so that “this modern day slavery can be eradicated”. She highlighted that currently there is only TIP unit in the GPF and it is located at the Criminal Investigations Department (CID). The unit consists of three ranks who are always offered assistance by the Major Crimes Unit of the GPF.

Inspector Fiona Harris of the Immigration Office of the GPF in her presentation of Victim Identification in TIP said that it is not narrowed down into one particular area. She highlighted that males are a part of the TIP industry, explaining, “It does not apply to females alone”. She noted that the stakeholders need to pay interest in the areas of mining, agriculture and even construction in the fight against TIP.

Harris, who received training from International Criminal Police Organisation (INTERPOL), reminded that when prosecuting or building a TIP case, the victims should be aware of their rights and prosecutors should have patience when interviewing them.  Elaborating on screening of victims by prosecutors, Harris said that they must be able to listen and be respectful, ask general questions first, use open body language, and be observant.

Additionally, Probation and Social Services Officer from the Ministry of Social Protection’s Counter-Trafficking in Persons (C-TIP) Denise Ralph, said that the Ministry has been working tirelessly to assist victims of TIP. She noted a number of victims, who are in the Ministry’s care, are enrolled in number of courses. These include cosmetology, home management among other areas.

Trafficking in persons shall mean the recruitment, transportation, transfer, harboring or receipt of persons, by means of the threat or use by force or other forms of coercion, of abduction, of fraud, of deception, of the abuse of power or of a position of vulnerability or of the giving and receiving of payments or benefits to achieve the consent of a person having control over another person, for the purpose of exploitation. Exploitation shall include, at a minimum, the exploitation of the prostitution of others or other forms of sexual exploitation, forced labour or services, slavery or practices similar to slavery, servitude or the removal of organ.

A number of Ministries, Non- Government Organisations (NGOs) and other stakeholders will be working together to combat TIP. Several awareness campaigns, which will target schools, are planned throughout the year to sensitise youths on human trafficking.

The Ministry of Social Protection’s Counter-Trafficking in Persons (C-TIP) The C-TIP unit is also planning a local documentary on human trafficking. This is aimed at eradicating the myth that trafficking only entails sex workers.  The possibility of conducting street theatres is also explored.

The unit intends to develop and pilot test a TIP module that is to be implemented in primary and secondary schools by the end of next year. The unit will continue to work with its partners including the Guyana Police Force (GPF), Guyana Geology and Mines Commission (GGMC), and the Guyana Women Miners Organisation (GWMO) to conduct outreaches in the various regions.