– Consultant to be hired in restructuring of GGMC

– $1B for roads in mining districts

– Improving governance and transparency in sector

Miners will have increased access to their claims and lands in 2019 with the allocation of $1Billion for maintaining and creating roads in mining districts. 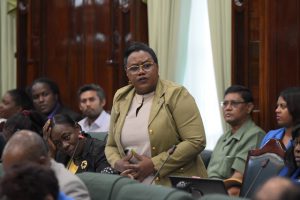 Minister within the Ministry of Natural Resources, Simona Broomes.

Minister within the Ministry of Natural Resources, Simona Broomes, said this is a clear sign of the government’s commitment to linking the hinterland with the coastland contrary to claims being made by the opposition.

Minister Broomes was addressing the National Assembly as the debate over the 2019 national budget continues.

The Minister noted that a number of new roadways will also be opened in 2019. These include Mathew’s Ridge – Port Kaituma – Barimita, Buckhall-Wiani River, linking the Puruni to Cuyuni River, road to Issano from Troy Resources, Pontoon Crossing at Butakari. The Ministry will also be developing roads from Lethem to Monkey Mountain

Next year will also see the start of the restructuring of the Guyana Geology and Mines Commission (GGMC). Minister Broomes noted that the Ministry will finalise the hiring of a consultant to lead the process in 2019.

Additionally, works have already begun to improve several departments within the GGMC. These include updating the information and systems at Land Management and Mines Division for a more transparent and efficient service to miners Minister Broome noted.

The Ministry will also review the policies and legislation governing its regulatory agencies to eliminate any loopholes to reduce the exploitation and increase transparency and governance in the extractive sector.

“Transparency is what this government is all about,” Minister Broomes said.