Mexico’s Ambassador to Guyana, Ivan Roberto Sierra-Medel said significant progress has been made in strengthening bilateral relations between Guyana and Mexico over the past year.

This disclosure was made by Ambassador Medel at a reception held recently at the Marriott Hotel, Georgetown on the occasion of the 206th independence anniversary of the United Mexican States (Mexico). 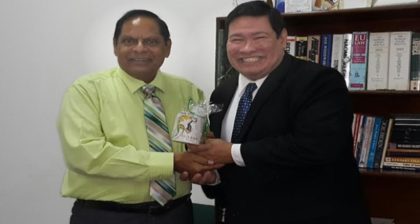 “It is my honour to be able to report that there have been concrete bilateral actions as we move ahead in all three areas,” the Ambassador stated.

The gathering was told that the foreign ministers of both countries held consultations, and in October 2015, the first bilateral visit was made by Prime Minister Moses Nagamootoo and Minister of Natural Resources, Raphael Trotman where business and development cooperation were promoted.

“Collaboration on climate change and energy entered a new stage when Prime Minister Moses Nagamootoo and Minister Raphael Trotman visited the Mexican Institute for Petroleum (IMP), the research and engineering agency that since 1965 has been at the centre of Mexico’s oil industry,” he said.

In June 2016, the team visited to begin bilateral collaboration on three deliverables, an energy matrix on production/consumption, a Guyanese model that incorporates best practices on regulatory framework, and a human resources development programme.

The Mexican Food Inspection Authority is working closely with the National Agricultural Research and Extension Institute (NAREI) to ensure that phytosanitary certification is achieved, in order to begin the commercialisation of Guyana’s paddy. Mexican paddy importers met with Minister Noel Holder in March 2016.

The development of the coconut industry in Guyana is also being supported by the Mexican government, and according to Ambassador Medel; this is seen as a priority.

“New avenues of bilateral collaboration made possible by the visit of Prime Minister Nagamootoo include a project that the Acuerdo de Yucatan infrastructure mechanism is seeking to fund in Guyana,” the Ambassador explained.

Ambassador Sierra-Medel noted that outside of these areas of interests, he would like the two countries to find more areas that could be of mutual benefits.

“As we move ahead in capacity building and the bilateral promotion of business, I would like to suggest that the concrete actions that our shared benefits have achieved lay the foundation for further collaboration,” he said.