Residents living in the squatting area aback the Number 65 Village in East Berbice-Corentyne, finally have access to potable water after decades of using water from the nearby canal for their daily chores.

Today the Guyana Water Incorporated. (GWI) installed a standpipe in the community.

This was made possible through a collaboration between the Office of The Prime Minister’s representative in Region Six, Gobin Harbhajan and GWI. 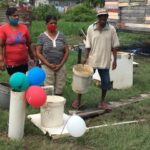 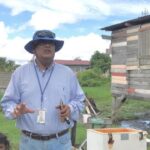 After their situation in the little know squatting was highlighted two weeks ago by the media., the residents were referred to Harbajan who then approached the utility company for assistance.

Harbajan said since the story was highlighted, donors have been coming forward and he has already received pledges for a large water tank as well as individual containers for each home to store water.

The approximately 40 families in the area welcomed the installation of the standpipe.

Mother of five, Mrs. Bharrat recalled the years of struggling to get water from the canal and being fearful of reptiles that inhabit the canal. A visibly relieved Bharrat noted that she could now send her children to collect water while she was occupied with other chores.

Harbhajan thanked GWI and cautioned the residents not to waste the precious resource.

He also disclosed that after observing that the children in the community have no access to the internet to do their school work, contact was made with the Ministry of Public Communications and a representative will be visiting soon to access the situation.