Minister of Finance the Honourable Winston Jordan said the evolution of the Inter-American Development Bank (IDB) over the years has added enormous value to the lives of the people of the Latin American and Caribbean. 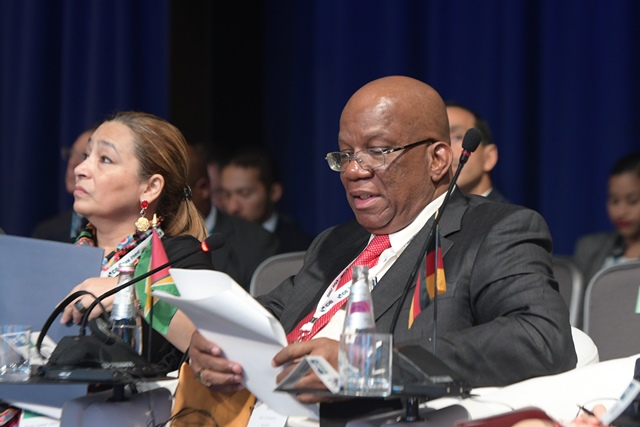 However, for it to remain relevant, it must undergo pragmatic reforms that would further align its strategies, policies and offerings to the requirements of non-borrowing member countries and the needs of its borrowing constituents.

Minister Jordan was delivering remarks at a celebration to mark the bank’s 60th anniversary in Washington DC on Friday.

“Moving forward, as an institution, we must dissect and introspect and ask ourselves some difficult questions, such as the devastating impacts of climate change are our response instruments and offerings sufficient? Especially to the smaller, poorer and more vulnerable countries of the Bank that are unable to take on additional debt burdens during a time of crisis,” he told the meeting.

Minister Jordan suggested a further revision of policies and instruments related to disaster response. As an institution with intraregional integration as a cornerstone of its work, he questioned if it offers regional instruments that would allow for the development of inter-country and regional projects.

“Perhaps, it is time to consider Regional instruments. As the fourth industrial revolution transpires, regional challenges are reinforced. Whilst technology offers much-required solutions, it deepens concerns about resources to equip a country’s human capital to thrive in this emerging environment and the agility of poorer countries to adjust and adapt at a rapid pace, whilst dealing with other competing and pressing development matters. Do offerings under the two main arms of the Bank incentivize the thrust towards bridging the technological divide between developed and less developed countries? Perhaps, it may be time to consider a different approach to financing operations that underpin the fundamentals and strategic focus of the Bank,” he stated.

While he saluted the many achievements of the bank in assisting governments across the region in building climate-resilient infrastructure, establishing robust fiscal frameworks, mobilizing resources to meet developmental objectives, he said its approach must be two-pronged.

“On one hand, the bank must assist countries in their quest to digitalize their economies, participate on global markets, and become competitive in key industries. On the other hand, it is critical that the bank to remain sincere to its mantra of improving lives by ensuring that the Region’s most poor and vulnerable populations are reached and adequately catered to through its operations.”

To remain a development giant in these uncertain times, Minister Jordan said the IDB must strengthen its institution by ensuring that undergirding policies are sound; the development effectiveness framework is robust and information on success stories demonstrating tangible results are widely distributed.