Georgetown, Guyana – (July 16, 2016) President David Granger and First Lady Mrs. Sandra Granger sang national songs and made merry with the children of the Hope Children’s Home at Enmore, East Coast Demerara, today, as part of continuing celebrations for the President’s 71st birth anniversary, which was observed yesterday. The event was organised by the Press and Publicity Unit and was the culmination of a Ministry wide book drive for the children of the orphanage. 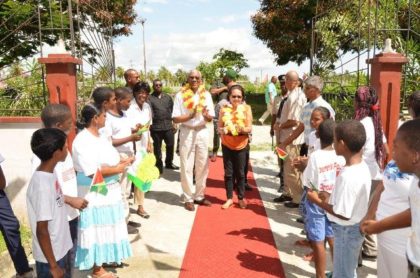 President David Granger and First Lady, Mrs. Sandra Granger were given a warm welcome, this morning, at the Hope Children’s Home.

Almost 400 books, stationery and toys were handed over to the home this morning in support of President Granger’s focus on ‘an education nation’.  Staffers across the Ministry donated books for the 40 children, between the ages of three and 18, many of whom, are differently abled.  The book drive exceeded expectations, raising 876 books in total.  The Ministry will donate the remaining books to other institutions where there is a need. 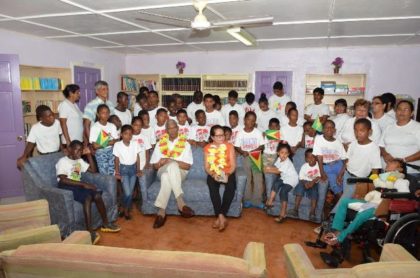 President David Granger and First Lady, Mrs. Sandra Granger with the children, director and care-givers in the library in the Hope Children’s Home

President Granger, while presenting the items, said that the home will continue to receive support from the Government as he remains focused on ensuring that every child has the opportunity to reach his/her fullest potential through education.

“Let me congratulate you for the work you are doing here and to assure you that the Ministry of the Presidency will continue to support your work… We have an opportunity in Guyana now to continue to remove inequalities so that persons who have challenges can have the same opportunities or equal opportunities to be the best that they can be. The Ministry and Government will do everything possible to ensure that they can enjoy the benefits of this land,” President Granger said. 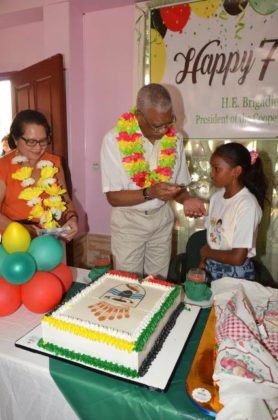 President David Granger sticks his birthday cake with little Rebecca one of the children at the Hope Children’s Home, as First Lady, Mrs. Sandra Granger (first, left) looks on.

Meanwhile, Director of the home, Mr. Kenneth Finlayson expressed gratitude to the President for the gesture. He noted that it will significantly help the centre to realise its goals.

“We are glad that you have taken [the] time to come and be with us and to share your birthday with us here today. We are excited to have you. I want to say that we are grateful that you and the members of staff have taken the time to make such a great presentation, because we believe in reading and education and I know that our President and First Lady do believe in that as well. We pray that God will continue to bless your work as you lead our nation,” he said.

Director of Communication and Head of the Press and Publicity Unit, Mr. Mark Archer, noted that the President has been a persistent advocate for an educated nation. He said that the donation, which included books by local, regional and international authors as well as text books, writing, drawing and colouring books and word games and puzzles, will help the children to increase their literacy and numeracy skills as well as fuel their imaginations. 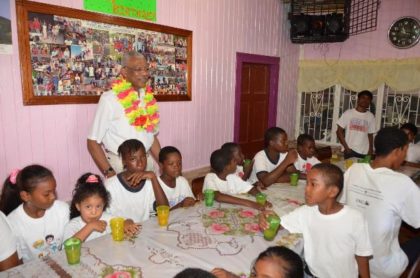 President David Granger and some of the children of the Hope Children’s Home at the book presentation held there, this morning, in honour of his 71st birthday

After a warm welcome and lots of cheers, President Granger and Mrs. Granger, accompanied by well-known musicians, Mr. David Dewar and his wife, Mrs. Marilyn Dewar, led the group in a series of some of the President’s favourite national songs, including “My Guyana El Dorado”, which delighted the children.

They also performed a lusty rendition of “Happy Birthday” for the President and when asked to choose a favourite national song of their, the children rose to their feet and loudly sang Dave Martin’s “Not a blade o’ grass”. 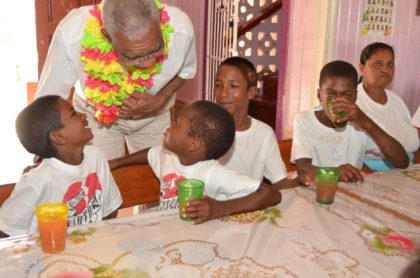 Rawle Narine, one of the children at the home, said that he was happy that the President was able to visit. “I am going to enjoy the books. I like reading”, he said.