President Granger told members of the organisation that unity and cohesiveness are embedded in his Government’s thrust to ensure equality across the country.

The Head of State encouraged the organisation to continue working towards making Guyana a more harmonious country.  He noted that after taking office in May 2015, the Ministry of Social Cohesion was established with its first minister being Ms. Amna Ally, to foster unity and inclusivity. 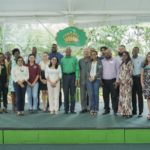 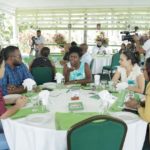 Members and Volunteers of Heal Guyana during a round table discussion held at the Baridi Benab, this afternoon. President David Granger is also pictured left (background).

“The whole concept of social cohesion is part of the philosophy [of bringing people together]”, the President said, noting that much of the incidence of racism is invented.

“It is not natural; it is abnormal. People invent it for their own purposes,” he said.

Further, President Granger said his administration has been working to eliminate all acts of discrimination, noting that it is a work in progress.

“I see a future in which our children could grow up respecting one another, other religions, ethnicities, cultural practices…We have to start aiming at the children to ensure they learn to live together and respect one another…[and] in due course we would have more respected relations,” President Granger said.

The Head of State said also that violence seems to be an easy resort and it must not be condoned.

Meanwhile, Founder of Heal Guyana, Mrs. Sharon Lalljee-Richard provided an overview of the work undertaken by the organisation. She spoke about an ongoing campaign ‘Call for Peace & Unity’  which seeks to reduce race-hate and violent conduct between the two historically divided ethnicities, through advocacy that uses the power of strategic storytelling, public education, monitoring of hate speech and engaging political leaders and citizens, across the divide.

“We understand this is not the kind of challenge that can be sorted overnight. We at Heal Guyana are committed to this. When it comes to the ethnic divide, this is one we plan to commit to on a long-term basis,” Mrs. Lalljee-Richard said.

The Heal Guyana founder explained that over the next two years the organisation will continue to address racism, domestic violence and mental health.

“These were areas of focus which were determined, not by us, but through consultation with hundreds of Guyanese who weighed in on where they believed, gaps for intervention existed,” she said.

The discussions were held in the Baridi Benab at State House.